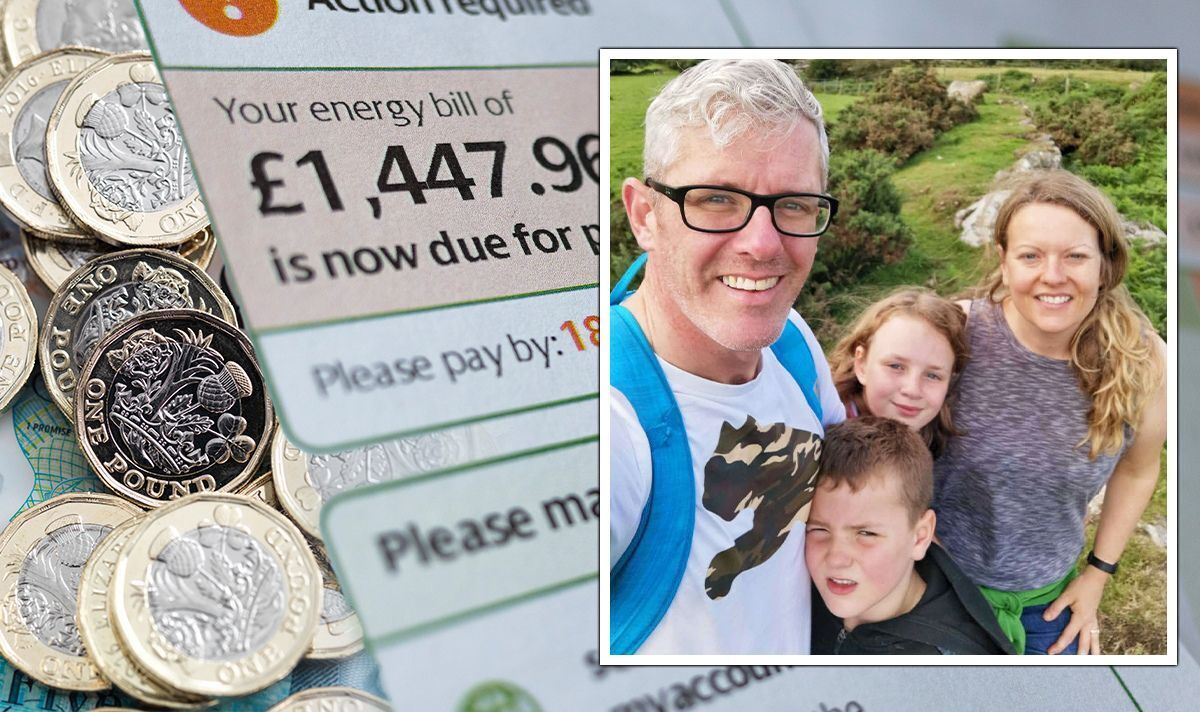 The days of being free and easy with energy are over. Now a father-of-two tells Express.co.uk how far he is willing to go save money, and how his family has reacted.

Stewart Morton-Collings, owner of For Me and For You Designs, which makes artwork, tableware, cards and gifts, is fighting back as his family’s bills go through the roof.

Stewart, 44 and wife Jax, 43, who live in Macclesfield, say their combined gas and electricity bill is on course to hit £700 from October, based on last year’s consumption.

Now they are taking “extreme” measures to cut back, and hope they can limit this to £400. “And we’re still going to find it tough affording that,” he says.

Stewart says it’s like going back in time as the family unplugs household appliances they used to take for granted, starting with the dishwasher.

Washing dishes by hand was a chore at first, but the family soon got used to it, using lukewarm water in a bowl in the sink. “With washing-up liquid and a good brush we can still get our dishes sparkling,” Stewart says.

The family has picked up loads of energy saving tips from Facebook group Energy Support and Advice UK.

“Now we wash all our clothes at 20 degrees, using laundry cleanser that kills bacteria at lower temps, and spin clothes on the fastest setting.”

They have also unplugged the tumble dryer and dry their clothes outside. This will be harder in winter but Stewart has a trick up his sleeve. “We’ve bought a heated clothes rack with a cover and use that with a dehumidifier. It dries a full wash in six hours for a fraction of the cost and warms the room, too.”

Stewart and Jax will order a ceiling mounted clothes rack to hang above their stairs. “My parents have always had one. Ideas that predate modern technology are the obvious way to go.”

Turning off their heated bathroom towel rails has made a huge difference, he says. “We had been heating them 24 hours a day for almost 12 years, without giving it any thought.”

Switching them off has saved a huge amount of electricity, he says, as has unplugging an old chest freezer in the garage. “It feels quite empowering to stop wasting money.”

They are even considering using camping stoves to reduce gas bills and an air fryer instead of the oven.

Heating their house over winter is the biggest worry. “We’re working out which radiators to use and when, and are fitting reflector foil behind them. We’ll also put up extra curtains.”

Stewart is disciplined about turning lights off when leaving a room, but the kids tend to forget. “I’m pretty sure it’s written in to the ‘Dad’ contract that I’m the one who complains that the house is lit up like a Christmas tree.”

He adds: “We can’t go walking around a pitch black house, so we’ll buy some big church candles and put them in large glass jars. We’ve just ordered some LED strip lights to run up the stairs.”

The family has built up £1,000 in credit with their energy supplier through these savings, which they hope will ease them into winter.

Stewart’s family is close and winter will be cosy. “In the evening we tend to all be in one room, rarely use the main lights and all our lamps have energy saving bulbs. We’ve got a huge fleece blanket that we can all snuggle under and the kids have onesies and slippers for when it gets chilly.”

Stewart says their children understand their parents don’t earn a lot of money. “They know it’s a trade off for running our own creative business. Luckily, they don’t use a lot of electricity, mainly TVs and games consoles.”

DON’T MISS:
This appliance will cost you £1,000 a year as energy cap jumps [REVEAL]
British Gas engineer shares top tips to save up to £450 on energy bill [GUIDE]
Man spends £62.50 on energy bills a month by living frugally [INSIGHT]

The family are also saving money outside the home. “I cycle the kids to school each day, then peddle across Macclesfield to my workshop,” Stewart says.

He has converted his mountain bike into a cargo bike, with a storage box on the back for books and lunch bags. This has helped slash his £150 a month van fuel bill to £50.

Jacqui works as a lecturer in Liverpool and is now ride sharing with a colleague.

Little extras like holidays, gifts, treats for the kids have all been forgotten, says Stewart, who is giving up his own treats, too. “I need to lose weight and those few bottles of beer during the week add up.”

Stewart and Jax also barter their business skills for everyday essentials. “We’ve paid for haircuts with Christmas decorations, swapped artwork for food, and bespoke signage for a new kitchen table.”

Finally, they also have to bring more money in. “Our only option is to work seven days a week, every week, with no breaks.”

Stewart knows where to draw the line with his extreme energy saving measures, though. “With two women in the house with long hair, there’s no way I’m cracking down on hair dryers. I won’t even try it.”