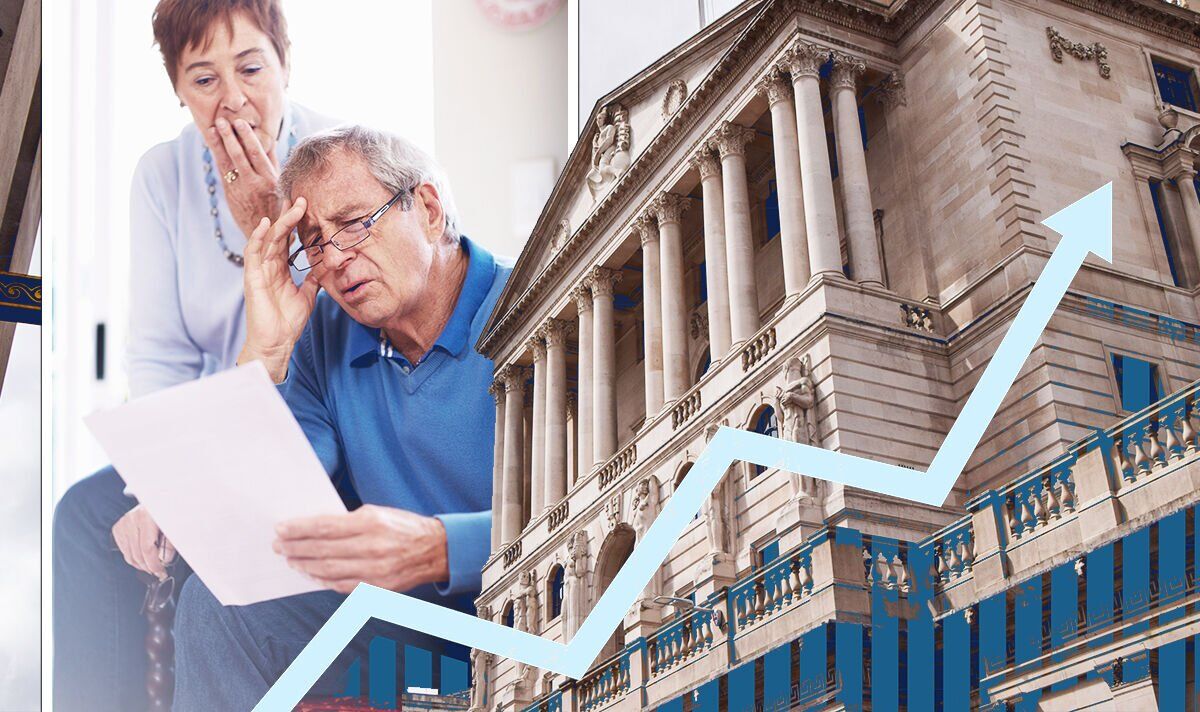 Interest rates have been steadily rising after a period of stagnation throughout the pandemic. However, the Bank of England announced yet another consecutive rate rise, this time the largest rate increase in 27 years.

For pensioners, it is a mixed bag of reactions as there could be positives and negatives to this news.

This year, the state pension only rose by 3.1 percent, following the scrapping of the triple lock and introduction of a temporary double lock.

Ian Mills, Partner at Barnett Waddingham, said: “Alongside the headline rate rise, the Bank of England has raised its forecast of inflation to 13 percent.

READ MORE: Pension: Britons could lose out on £7,800 through ‘torpor tax’

However, pensioners will only receive this increase if the base rate decision is reflected and passed on by the banks – which is not always the case.

But for those who are on the cusp of retirement, or a few years in and looking to purchase an annuity, another rate rise could be fantastic.

Annuities offer Britons a guaranteed and regular income in retirement until they die.

People will be able to purchase an annuity using the entirety of their pot, or alternatively only a portion.

Annuities have previously suffered years of bad rates, which was frustrating for those who wanted a guaranteed income. It meant some turned to drawdown, which keeps a pension pot invested.

READ MORE: Universal Credit payments could stop if you go on holiday

However, annuity rates have been on the rise and could be further bolstered by today’s decision.

Commenting on the implications for pensioners, Andrew Megson, executive chairman of My Pension Expert, said: “Another interest rates increase – particularly a more significant jump than previous ones – would usually be good news for pension planners, improving the performance of their savings.

“In reality, any improvements in the interest earned on savings will be dwarfed by inflation, which is only going to rise more steeply in the months to come.

“Make no mistake, the current economic climate is very difficult to navigate and the consequences are far-reaching. Over-50s are coming out of retirement in their thousands due to the cost-of-living crisis. Many more will be worried about their financial futures.

“It is so important right now to refrain from making any rash decisions that could later damage a person’s financial security.

“Where pension planning is concerned, in times of economic uncertainty it’s crucial to first review your retirement strategy.”

Chancellor of the Exchequer, Nadhim Zahawi said: “Along with many other countries the UK is facing global economic challenges and I know that these forecasts will be concerning for many people.

“Addressing the cost of living is a top priority and we have been taking action to support people through these tough times with our £37billion package of help for households, which includes direct payments of £1,200 to the most vulnerable families and a £400 discount on energy bills for everyone.

“We are also taking important steps to get inflation under control through strong, independent monetary policy, responsible tax and spending decisions, and reforms to boost our productivity and growth.