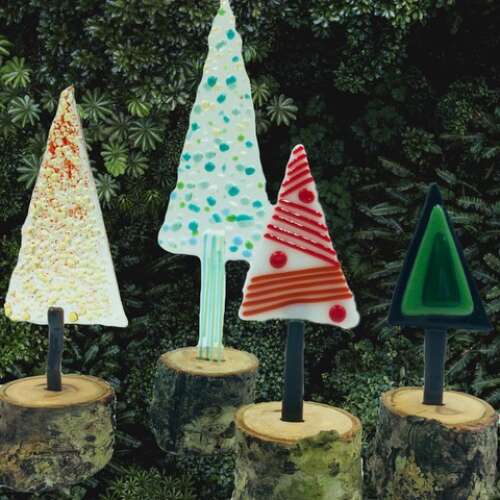 Artisan, fused-glass products and instruction, perennial and for winter holidays

Determined to build “a second career and a second life,” Jeni GrayRoberts of Deep River opened her studio in 2017, offering kiln-formed glass instruction and bespoke products.

She needed a second career because she left her first one behind in New York City when the family moved to Connecticut; she needed a second life as she emerged from a seven-year battle with invasive breast cancer.

In 2006, she and her husband moved with their toddler to this area where he had accepted the executive directorship of a museum. In New York, she worked for 20 years in various fields, including banking and advertising.

“In Connecticut, I became a stay-at-home mom, and our second child was born in 2007,” GrayRoberts said. “Early in 2010, I was diagnosed with invasive breast cancer, and that became my family’s and my ‘lost year.’ Multiple surgeries and months of chemo ensued – a grueling ordeal. Treatment and debilitating side effects continued for seven years.

“The love and support of my immediate family, the practical, day-to-day assistance of the local community, and moral support of my extended family enabled me to pull through,” she said.

“In 2015, with only two years of treatment left, I decided that for the rest of my time on earth, whether that be 50 years or less, I would do something I love, creating a legacy and arranging my work days to optimize time with family,” she said. Hence her decision to be a solopreneur, someone who starts, runs, and owns a business independently, without a co-founder or W-2 employees.

In New York City, GrayRoberts had chanced upon a series of how-to classes on kiln-formed glass conducted by the Craft Students League. The daughter of a Pratt Institute graduate/fine-arts teacher (her mother) and an electrical engineer (her father), Gray-Roberts gravitated to formed glass because it combines art and science.

Seeking a second, fulfilling career that would permit her to set her own hours working from home, she settled on a kiln-formed glass studio in what had been their garage, remodeled into a studio by her husband and equipped with a kiln – a gift from her mother.

When she formed an LLC in 2017, she had already connected with the Eastern Connecticut chapter of SCORE (Service Corps of Retired Executives), a nationwide, nonprofit association and resource partner of the U.S. Small Business Administration that offers free, confidential advice to small-business owners.

“There is no chance my business would be where it is without SCORE’s counsel,” said GrayRoberts, a SCORE client since 2015. “They helped me write a business plan and have regular mentoring sessions to monitor progress and redirect effort as appropriate. As important as the technical assistance, the SCORE mentors encouraged me and constantly reaffirmed that I could accomplish my ambitious goals.”

GrayRoberts attended many of our workshops on business and entrepreneurship skills, said mentor and former chapter president Margo Weitekamp. She has accessed many of our resources for small business.

SCORE also recommended connecting with business and arts groups in the community, so GrayRoberts joined River Valley Artists, in the tri-town area of Essex, Chester and Deep River. They stage an annual tour of members’ studios in the autumn, in addition to permanent exhibits and retail outlets at studios like hers.

RiverFire Glass is part of the South of Main Art Collective in Deep River, along with Lynalynn Schmelzer’s Valley Dance Project, and Chelbi Wade’s Shell and Bee Studio. This is where Gray-Roberts sells her wall art, jewelry, garden ornaments, plates, bowls and platters, and the Christmas tree ornaments.

“When I was working in corporate offices in New York City, which had its own challenges and rewards, I always dreamed of using my imagination to create physical beauty,” GrayRoberts said. “Now I am doing exactly that.”

Hugh M. Ryan is a certified mentor for the Eastern Connecticut chapter of SCORE. He can be reached at hugh.ryan@scorevolunteer.org.

Kiln-forming is the process of shaping glass in a kiln with heat and gravity. There are many methods and techniques within kiln-forming, and one that Gray-Roberts uses often, but not exclusively, is glass fusing. Fused glass technology involves joining compatible sheet glass pieces, fired in a kiln to 1,200 F. – 2,000 F. degrees.

In this context, “compatibility” means that the glass pieces all have the same coefficient of expansion (COE), a measure of how glass expands and moves in a kiln. Her average kiln temperature is 1,400 degrees F.

Gray-Roberts refers to this as the “Goldilocks of glass work” because it involves lower kiln temperatures than blowing and shaping molten glass (2000 degrees F. and up), but higher than stained glass work. The latter joins cut pieces of shaped and finished room-temperature glass with strips of metal, such as lead, zinc, or copper, into two-dimensional designs.