A strong bull market for many years may have given some investors the misimpression that everything goes up. For some period of time, that’s pretty much what happened, with some growth stocks skyrocketing in price with percent gains in the thousands. It looked easy, because it was.

Many new investors never experienced a bear market, but many of those early gains have now been completely wiped out. It turns out that it may not be so easy to accumulate wealth overnight or over months.

One consistent voice of reason through decades of ups and downs is guru investor Warren Buffett, who has beaten the market through his value-oriented approach. It’s always worthwhile to listen to what he says, but in this kind of market it makes even more sense to make note of what he looks for in a stock. There are several factors that inform his decisions, but there’s one that stands out in how he defines a great business.

What is a moat?

Buffett says, “A truly great business must have an enduring ‘moat’ that protects excellent returns on invested capital.” The “moat” he talks about refers to a competitive advantage that makes the business unique and better than others. In a literal sense, a moat protects a castle from oncoming attacks. In the markets, a moat protects a business from challengers.

There are several parts of this formula. One is that the moat has to be enduring. If it’s not, it’s not really protective. It also has to protect excellent returns on invested capital, which means those need to be there in the first place. If a company seems differentiated but is not performing and posting excellent results, the business will fall apart despite any seeming advantages.

Buffett goes on to say:

The dynamics of capitalism guarantee that competitors will repeatedly assault any business “castle” that is earning high returns. Therefore a formidable barrier such as a company’s being the low-cost producer…or possessing a powerful worldwide brand…is essential for sustained success.

He gives several examples. Geico (owned by Buffett’s holding company, Berkshire Hathaway) and Costco Wholesale both operate a discount model that is compellingly better than competitors. That’s a moat, because they are both hard to challenge.

As for a powerful, global brand, he cites Coca-Cola (KO 0.72%) as an example. Despite years of taste-testing and debates about whether or not Coca-Cola is better than your local off-brand, Coca-Cola can demand high pricing, and loyal customers respond. Coca-Cola remains the largest beverage brand in the world by sales, and its unbeatable brand is a robust sales generator, driving excellent returns on invested capital.

Buffett also mentions American Express (NYSE: AXP) as having a moat in its powerful brand. It has a premium image with real perks that attract an affluent clientele. Other credit card companies that cater to a wider mix of customers do not carry the same cachet.

Finding businesses with real moats can lead to higher long-term gains. Buffett made these remarks over 15 years ago, and the examples he mentions have indeed endured. Coca-Cola and American Express remain two of his top holdings, and they have been posting outstanding results in an otherwise slumpy market and volatile economy. Their brands have endured over time and look to carry their companies well into the future. Buffett sold his position in Costco in 2020, but it also remains a top stock. Although only Coca-Cola stock is showing a gain so far this year, all of these stocks are beating the market. 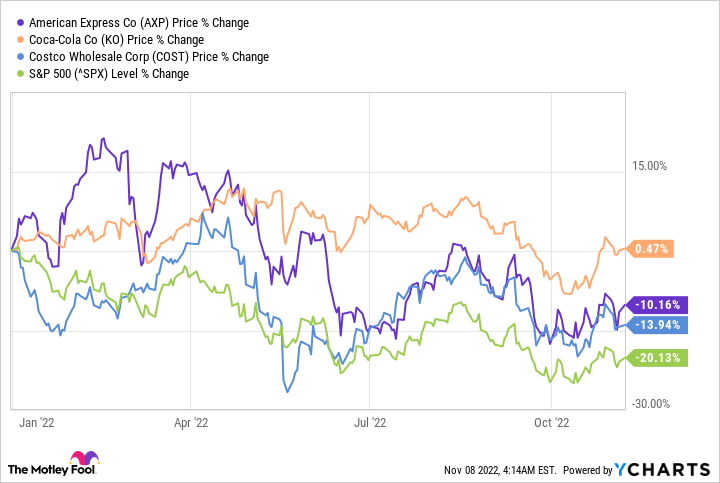 A strong moat is a mark of a great business. Building one takes an excellent business, a competitive advantage, and the ability to strengthen that advantage over the long term. Shifting your focus to investments that demonstrate these qualities, instead of looking for the next hot growth stock, can lead to more successful long-term investing.