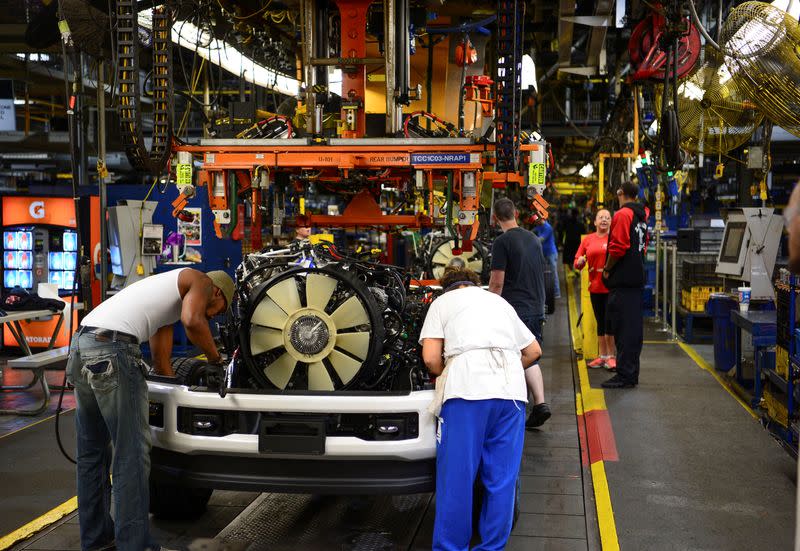 (Reuters) – U.S. business activity contracted for a fourth straight month in October, with manufacturers and services firms in a monthly survey of purchasing managers both reporting weaker client demand, the latest evidence of an economy softening in the face of high inflation and rising interest rates.

S&P Global said on Monday its flash U.S. Composite PMI Output Index, which tracks the manufacturing and services sectors, fell to 47.3 this month from a final reading of 49.5 in September.

A reading below 50 indicates contraction in the private sector. Outside the slump during the first wave of the COVID-19 pandemic in the spring of 2020, business output is retreating at the swiftest pace since the 2007-2009 global financial crisis, by S&P Global’s measure at least.

“The U.S. economic downturn gathered significant momentum in October, while confidence in the outlook also deteriorated sharply,” S&P Chief Business Economist Chris Williamson said in a statement. “The decline was led by a downward lurch in services activity, fueled by the rising cost of living and tightening financial conditions.”

But the S&P Global survey may exaggerate the slowdown. Rival surveys from the Institute for Supply Management have shown manufacturing and services industries still expanding through September.

Though gross domestic product contracted in the first and second quarters, the income side of the growth ledger showed the economy growing at a moderate pace over that period, and overall expansion likely resumed in the third quarter. Estimates among economists polled by Reuters for the first reading of third-quarter GDP, due from the Commerce Department on Thursday, range from an annual growth rate of 0.8% to 3.7%, with a median estimate of 2.4%.

That said, the economy is slowing as the Federal Reserve aggressively tightens monetary policy to cool demand and bring inflation back to the U.S. central bank’s 2% target.

The Fed delivered a 75-basis-point rate hike in September, its third straight increase of that size, and a fourth of that magnitude is expected at next week’s policy-setting meeting, though how aggressive policymakers remain after that is seen as one of the issues up for debate at the Nov. 1-2 meeting.

The flash composite new orders index slid to 49.0 from a final reading of 50.9 in September.

The survey’s measure of prices paid by businesses for inputs edged up to 67.8 from 67.3, which had been the lowest since January 2021, reflecting the uneven pace of easing in supply bottlenecks. Businesses are also not raising prices for their products as much as they did earlier in the year, in part because of slowing demand.

The survey’s flash manufacturing PMI fell to 49.9 this month, its first contractionary reading since June 2020, from 52.0 in September. Economists polled by Reuters had forecast the index slipping to 51.0. New orders dropped sharply to their lowest since the COVID lockdowns in the spring of 2020.

The survey’s flash services sector PMI fell to 46.6 from 49.3 in September. Services businesses reported both input prices and prices charged nudged up in October after declining steadily since late spring, a reflection of the uneven pace of easing in inflation pressures.