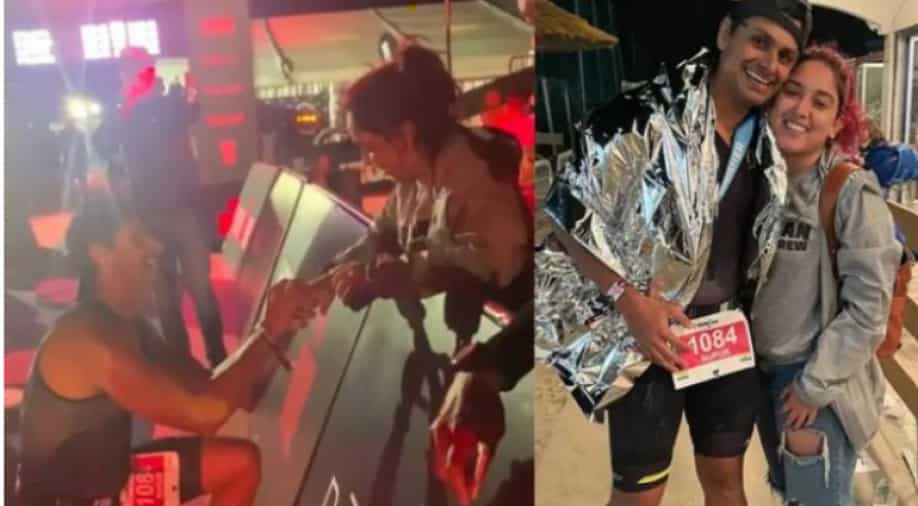 Aamir Khan’s daughter Ira Khan is engaged! On Thursday, Ira announced on her Instagram handle that she has finally said yes to her longtime beau Nupur Shikhare.

Ira and Nupur, who is a fitness trainer, are dating for around two years now.

Taking to her social media handle, Ira shared a video of their dreamy proposal, which took place during Nupur’s cycling event in Italy. In the clip, Ira is standing as an audience member of the competition in which her beau participated. Nupur comes towards her, kisses her, and in no time Nupur went down on his knees. Taking out the ring box from his shirt, Shikhar asks, “Will you marry me?” To which, Ira happily replied, “Yes.”

Sharing the clip for her fans and followers, Ira wrote, ”Popeye: She said yes 🥰❤️Ira: Hehe☺️🤭😋 I said yes.”
Nupur also shared a picture of them from the event and wrote, ”She said yes.”

Soon after the announcement, many celebrities congratulated the couple. Fatima Sana Shaikh commented, “This is the sweetest thing I have ever seen. Uff. @nupur_shikhare so filmy uff. ❤️❤️❤️❤️”

Calling the proposal, ”cutest thing ever”, Krishna Shroff wrote, “This is THE cutest thing EVER! Congratulations, baby girlll.”

Ira has never shied away from PDA on Instagram. Her IG feed is full of beautiful pictures of them together. Ira and Nupur are dating since 2020 and this year in June the couple celebrated their second anniversary.

Marking the special occasion, the star kid shared several adorable photos of them together and wrote, “It’s actually been two years but it’s feels like it was always like this. I love you. As truly and genuinely as I am capable of loving. For everything.”

Ira is Aamir Khan and his first wife Reena Dutta’s daughter, with whom he also shares a son named Junaid.