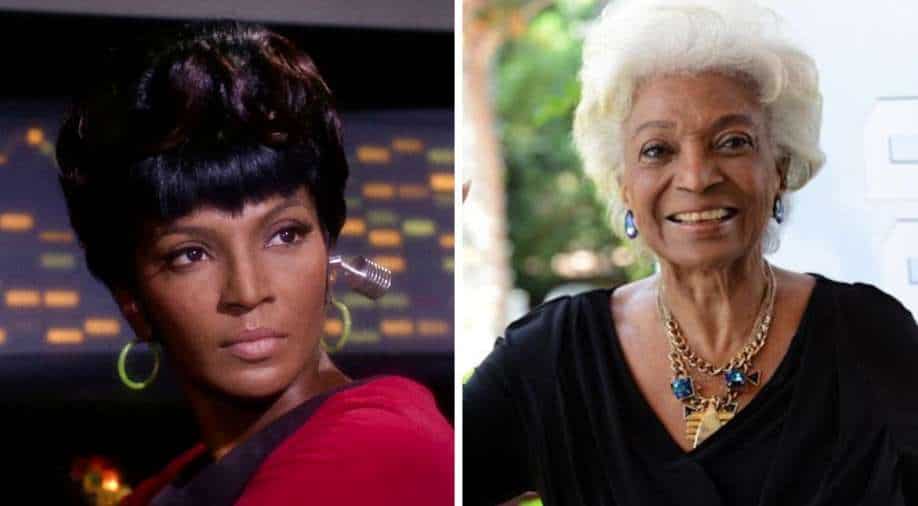 Nichols, whose fans included Martin Luther King Jr. and a young Barack Obama, “succumbed to natural causes and passed away” on Saturday night, her son, Kyle Johnson, wrote on Facebook.

“Her light however, like the ancient galaxies now being seen for the first time, will remain for us and future generations to enjoy, learn from and draw inspiration,” Johnson wrote.

The series, which became a pop culture phenomenon, shattered stereotypes common on U.S. television at the time by casting Black and minority actors in high-profile roles on the show.

In 1968 she and ‘Star Trek’ star William Shatner broke a cultural barrier when they engaged in U.S. television`s first interracial kiss.

She had planned to quit “Star Trek” after one season, but King, the 1960s civil rights leader, convinced her to stay because it was so revolutionary to have a Black woman playing an important senior crew member at a time when Black people were fighting for equality in American society.

Nichols also helped break color barriers at NASA, whose leaders were ‘Star Trek’ fans. After she criticized the space agency for failing to pick qualified women and minorities as astronauts, it hired Nichols in the 1970s to help recruit.

Nichols “symbolized to so many what was possible” and “inspired generations to reach for the stars,” NASA said on Twitter.

Nichols` portrayal of the competent, level-headed Uhura also helped inspire future Black actors, including Oscar winner Whoopi Goldberg. Nichols recalled Goldberg telling her of watching “Star Trek” as a 9-year-old, seeing her playing Uhura, and yelling out to her mother: “Come quick! There`s a Black lady on television and she ain`t no maid!`”

The original ‘Star Trek’ series, tracking the adventures of the crew of the starship USS Enterprise in the 23rd century, ran for only three seasons on the NBC network from 1966 to 1969. But it became hugely popular in syndication in the 1970s, inspiring first an animated series that reunited the cast from 1973 to 1975 and then a succession of feature films and shows.

Takei wrote on Twitter that he and Nichols “lived long and prospered together,” describing her as trailblazing and incomparable. “(My) heart is heavy, my eyes shining like the stars you now rest among.”

Nichols` best-known scene featured the first scripted interracial kiss on U.S. television, although it was not a romantic one. In an episode called “Plato`s Stepchildren,” Uhura and Kirk were compelled telekinetically to smooch by aliens toying with the feeble humans. In real life, Nichols disliked Shatner, who she considered arrogant.

“She was a beautiful woman & played an admirable character that did so much for redefining social issues both here in the US & throughout the world”, Shatner said on Twitter.

She felt differently about ‘Star Trek’ creator Gene Roddenberry, who cast her after she had acted in a previous show he produced. Nichols had a romance with him in the 1960s and sang a song called “Gene” at his 1991 funeral.

VISIT TO THE WHITE HOUSE

Obama, the first Black US president, who was 5 years old when the “Star Trek” series made its debut, also was a fan. Nichols visited him at the White House in 2012 and posed for a photo in the Oval Office, with the president smiling and putting his hand on her shoulder while both made a “Star Trek” Vulcan hand gesture meaning “live long and prosper.”

In a 2011 interview with Smithsonian magazine, Nichols recalled meeting King at a civil rights group`s fundraiser.
Nichols said she was approached by one of the event`s promoters, who told her, “There`s someone who wants to meet you and he says he`s your biggest fan, so I`m thinking of a young kid. I turn around and standing across the room, walking towards me, was Dr. Martin Luther King with this big smile on his face.”

After Nichols told King she planned to quit “Star Trek,” she said he implored her to stay.

She said King told her: “This is a God-given opportunity to change the face of television, change the way we think. We are no longer second-class, third-class citizens. He (Roddenberry) had to do it in the 23rd century but it`s the 20th century that`s watching.`” She rescinded her resignation.

Like other “Star Trek” cast members, she had a hard time finding work due to typecasting after the original series ended. It was during this time when she played a foul-mouthed madam in the film “Truck Turner” (1974) starring Isaac Hayes. She was a recurring character on the television show “Heroes” in 2007.

She was born on Dec. 28, 1932 in Robbins, Illinois, trained as a singer and dancer and toured with jazz greats Duke Ellington and Lionel Hampton before her acting career took off.

Nichols, who was married twice and had one child, suffered a mild stroke in June 2015.