Johnny Depp and Amber Heard’s defamation case has brought out a lot about the ex-couple marriage that no one would have thought. As the case continues in the Virginia court, the formar couple’s name has been one of the trendiest topics for the past month now.

The court battle which has become the talk of the world has reached a new level. On Sunday night, once again their name was all over the internet as the netizens found out that Amber’s last name on IMDb has been changed from ‘Heard’ to ‘Turd’.

The altered name appears on the google search but as one clicks on the name it appears correctly on the IMDb’s site. Looks like someone hacked IMDBs cms and changed her surname from Heard to turd as it was appearing only on Google search results, not on the actual site. 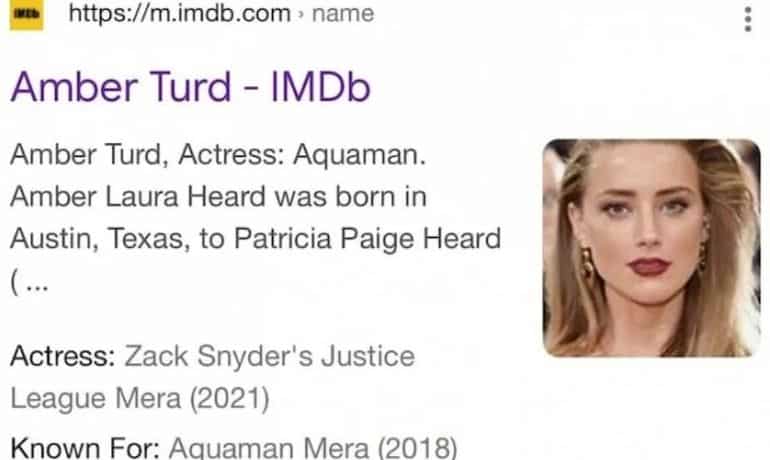 The turd which means a ”lump of excreta” connects it with Johnny Depp’s shocking revelation that how he found human faeces on his side of the bed.

Last month, during the testimony, Depp shocked everyone as he claimed that he discovered human faeces on his side of the bed.

Recalling, Depp said it happened after Amber’s birthday party at their Los Angeles home and he showed up late, which angered Amber. However, the next day when he decided to visit home to take his things when Amber was away, his security guard Sean Bett told him that it was not an appropriate time to visit and showed him the photo of the faeces on his side of the bed.

”My initial response to that was, I mean I laughed. It was so outside. It was so bizarre and so grotesque that I could only laugh. So I did not go down there that day,” he reportedly said during the hearing.

However, Amber has denied the allegations by saying it was done by one of their dogs.

Internet users are constantly sharing their remarks on the name change, check their reactions below!

In recent weeks, The couple has revaled some gruesome and bizarre revelations about their troubled past.