Skip to content
HomeEntertainmentAnimal: Rashmika Mandanna shares a picture of Ranbir Kapoor from the sets and it will make BTS’ ARMY super happy

Rashmika Mandanna has a few Bollywood films lined up and one of them is Animal which stars Ranbir Kapoor as the male lead. The movie is being directed by Sandeep Reddy Vanga, and a few weeks ago, a couple of pictures of Ranbir and Anil Kapoor were leaked online. Earlier this year, a video of Ranbir and Rashmika from the sets of the film in Manali was also leaked. Well, today, Rashmika is shooting Ranbir and Sandeep, and she took to Instagram to share a picture from the sets, and the picture will sure make BTS’ ARMY super happy. Check out the picture below… Also Read – Kartik Aaryan, Shahid Kapoor and more Bollywood actors spotted with trendy sweatshirts today – who’s your pick for the coolest dude? [View Pics] 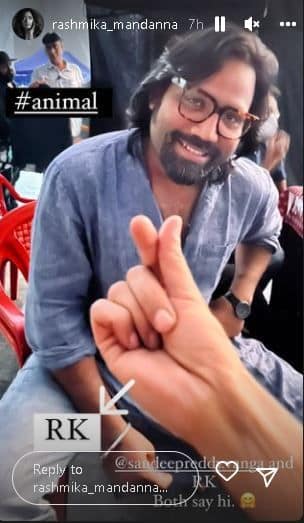 Also Read – Shehnaaz Gill gets down and dirty in the mud as she goes off roading; fans say, ‘Mummy maregi’ [View Pics]

The ‘finger heart’ gesture that Ranbir Kapoor is doing in the picture is actually a popular South Korean gesture that a lot of celebs there do while posing for pictures. Even BTS members Jin, Suga, J-Hope, RM, Jimin, V, and Jungkook do this gesture. So, of course, this picture of Ranbir will make BTS’ ARMY very excited. Also Read – The Bullet Train actor Brad Pitt’s ever-changing looks give you a comprehensive glimpse at his hair evolution

While posing for the paparazzi, Rashmika also does the ‘finger heart’ gesture. So, we wonder if she taught Ranbir how to do it. Talking about Animal, apart from Ranbir and Rashmika, the movie also stars Anil Kapoor and Bobby Deol. The film is slated to release next year.

Meanwhile, Rashmika has her kitty full of movies like Sita Ramam (Telugu), Goodbye (Hindi), Mission Majnu (Hindi), Varisu (Tamil), and Pushpa 2: The Rule (Telugu). The actress is currently busy with the promotions of Sita Ramam which is slated to release on 5th August 2022.