Skip to content
HomeEntertainment‘Avengers: The Kang Dynasty’ and ‘Avengers: Secret Wars’: What do those titles mean? 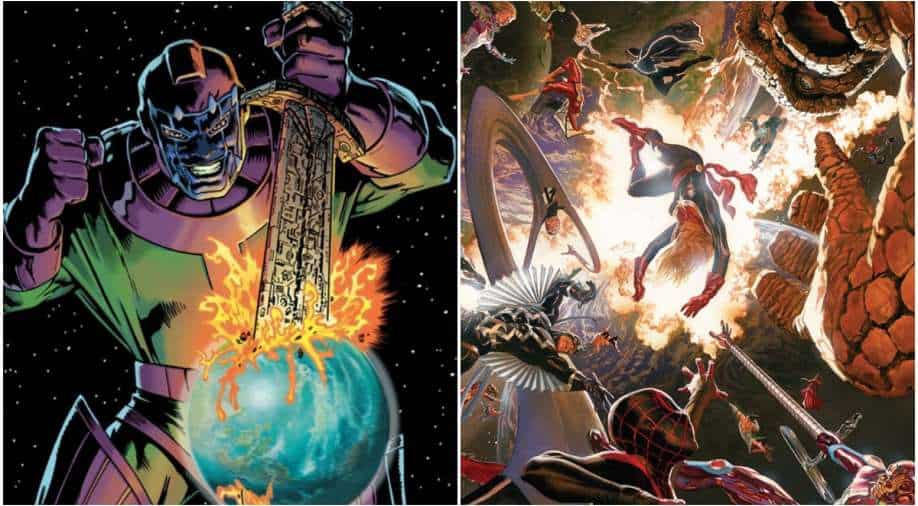 We finally have a faint idea as to what the future of the Marvel Cinematic Universe looks like, at least a little bit. Not only did the panel introduce the next phase in the cinematic universe, Phase 5, but also talked quite a bit about Phase 5. We now know how the already released MCU movies are shaping up the immediate future of MCU. Apart from several announcements regarding standalone movies or sequels like ‘Black Panther: Wakanda Forever’, ‘Captain America: New World Order, Marvel Studios has announced the title of the next two movies in the ‘Avengers’ series. While the fourth ‘Avengers’ movie is called ‘Avengers: The Kang Dynasty’, the fifth ‘Avengers’ movie is called ‘Avengers: Secret Wars’.

Marvel Studios will be expecting to recreate the success of ‘Infinity War’ and ‘Endgame’. Made on a staggering combined budget of $500 million, the movie also delivered in spades. Both the critical reception and commercial performance of the films were probably more than even Kevin Feige had hoped. The films, which ended the threat of Thanos, together grossed a mind-numbing $4.83 billion.

Interestingly, the two movies will release only half a year apart from each other: ‘The Kang Dynasty’ on May 2, 2025 and ‘Secret Wars’ on ‘November 7th, 2025′. While we do not know anything about the films’ plot and how the intervening MCU films lead to the big two-part finale (much like ‘Avengers: Infinity War’ and ‘Avengers: Endgame’), the titles themselves go a long way in hinting fans about the story.

What does MCU Phase 6 entail?

So everything that happened after ‘Avengers: Endgame’, which ended what was called the Infinity Saga, comes under the Multiverse Saga. We have already seen the concept of the multiverse playing out in shows like ‘Loki’ and movies like ‘Doctor Strange in the Multiverse of Madness’. So the next big overarching saga in MCU will be based on the multiverse. It implies that there can be potentially infinite versions of the character we know as per the term our universe is not the only universe but just one of infinite universes. Also, thanks to the multiverse, hitherto unseen Marvel characters like X-Men and Fantastic Four can enter MCU. Earlier, these characters were owned by Fox, but that was before Disney acquired most of the Fox properties.

Welcome to the Multiverse Saga. The filmmakers and talent of Marvel Studios were out in full force in Hall H this weekend, surprising fans with special looks, trailers, and some major announcements for the future of the MCU. #SDCC2022 (1/3) pic.twitter.com/GzKaf4LHmB

MCU can say, the mutants and the FF arrived from parallel universes! Simple.

Now, let’s theorise about what those titles of the fourth and fifth ‘Avengers’ movies may mean.

There is an entire storyline called Kang Dynasty in Marvel Comics. And we know Kang the Conqueror is arriving in MCU with the third ‘Ant-Man’ movie, ‘Ant-Man and the Wasp: Quantumania’. We already saw Jonathan Majors playing a gentler variant of him called He Who Remains in the finale of ‘Loki’ season 1. Found inside Citadel at the End of Time, He wanted Loki and Sylvie about his less-than-kind variants who can potentially wreak havoc on the multiverse. And Kang is certainly one of them.

Unlike Thanos, Kang is a full-on conqueror and at least in comics, does not have any noble reasons for his conquests. But his conquests are not of land but temporal. He is a time-travelling being who belongs to 31st century. He was a descendant of his namesake Nathaniel Richards, the father of Reed Richards or Mr Fantastic (played by John Krasinski in ‘Doctor Strange in the Multiverse of Madness’). He found out about the time travel technology invented by Doctor Doom and sought to use it, thus becoming a conqueror of temporal domains.

In Kang Dynasty, Kang attacks the earth along with his son Marcus or Scarlet Centurion (a mantle earlier held by Kang). The giant storyline is certainly worth an ‘Avengers’ movie, but it is ‘Secret Wars’ (fifth ‘Avengers’) that is the real deal that dwarfs it, and will likely lead directly from ‘The Kang Dynasty’.

Russo Brothers have expressed interest in directing a ‘Secret Wars’ movie. And it would certainly be ambitious. As Joe Russo said, it will be bigger than ‘Infinity War’ and ‘Endgame’, which speaks volumes about the difficulties in production that Marvel Studios is going to face. Arranging actors’ schedules and letting them film around other projects was a nightmare for the studio.

The Russos told Deadline, “Our love for Marvel is based on the books that we read as kids and the books that we fell in love with. The one series that we adored growing up was Secret Wars. It’s incredibly ambitious, it would be bigger than Infinity War and Endgame, but it’s a massive undertaking. And, you know, those two movies were very hard to make. So, trying to imagine making another two movies even bigger than those two—we’re going to have to sleep on it.”

Also Read: Russo Brothers want to direct ‘Secret Wars’ for MCU: It would be bigger than ‘Infinity War’ and ‘Endgame’

However, Feige said in a media interaction that Russos will not direct ‘Secret Wars’. While talking to Deadline, he said, “They’re not connected to it. They’ve been very direct about that. We love them, they love us. We want to do something together, it’s not this.”

Also Read: After ‘Thor Love and Thunder, ‘Deadpool 3’, ‘Shang-Chi 2’, ‘Thunderbolts’ and all other 11 upcoming MCU movies

So, there have been two big crossovers events in Marvel Comics called ‘Secret Wars’, one in 1984 and the second in 2015. The original was the first ever crossover in Marvel Comics that brought together all the properties in one giant storyline. A mechanical ring mysteriously appeared in New York’s Central Park and the superheroes found themselves lured to it. But when they came near, they are transported to a realm called Battleworld. It was later revealed that Beyonder, an insanely powerful cosmic entity, has spirited away a group of superheroes and supervillains in a battle between good and evil. Beyonder, you see, is just curious who would ultimately win.

In the 2015 version, the main Marvel Universe was destroyed and other alternate universes’ earth began to combine to form Battleworld. As one can tell, adapting ‘Secret Wars’ will be a tall order indeed, one that surpasses anything seen in the MCU until now.