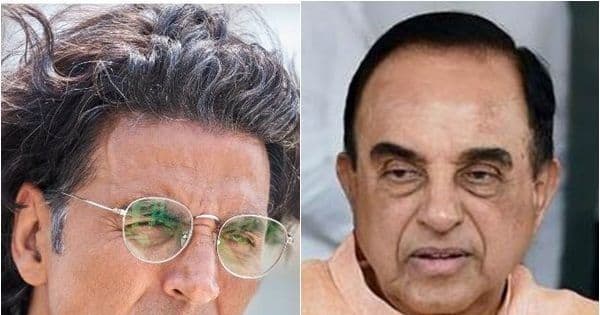 Bollywood actor Akshay Kumar has landed in hot waters for his upcoming film Ram Setu. BJP leader Subramanian Swamy said that he will sue the actor and the makers of the film for the ‘falsification in the portrayal of the Ram Setu issue’ in their film. The politician also stated that he would be seeking compensation from the makers. Also Read – Samantha Ruth Prabhu buys the same house she lived in with Naga Chaitanya before separation; check the whopping amount

“The suit for compensation has been finalised by my associate Satya Sabharwal Adv. I am suing Akshay Kumar, actor & Karma Media for damages caused by falsification in the portrayal of the Ram Setu issue in their film for release,” Swamy tweeted. “If actor Akshay Kumar is a foreign citizen then we can ask he be arrested and evicted from his adopted country,” he said in a follow-up tweet. Also Read – Throwback Thursday: When Shilpa Shetty alleged her ex Akshay Kumar ‘used and dropped her’ after two-timing with Twinkle Khanna

A film based on Ram Setu, has been produced by Karma Media, where Dr. @Swamy39’s SC Order has been used as a Poster. Will be filing a Suit.

“Karma Media | Contact us: Are you stealing the Ram Setu case as yours by morphing the Supreme Court Order that I got?” ??

Copies of the SC Order in the Ram Setu Case:

The suit for compensation has been finalised by my associate Satya Sabharwal Adv. I am suing Akshay Kumar, actor & Karma Media for damages cause by falsification in portrayal of the Ram Setu issue in their film for release.

If Actor Akshay Kumar is a foreign citizen then we can ask he be arrested and evicted his adopted country.

The UPA government, in 2007, had proposed a Sethusamudram project. Under this project an 83-km-long deep-water channel was to be made by extensive dredging and removal of the limestone shoals, to link Mannar with Palk Strait. Swamy moved against this decision in the court and the government resorted to another plan to link Mannar with Palk Strait. Also Read – Deepika Padukone, Neha Kakkar, Shibani Dandekar and more – Bollywood celebs who got inked in the name of love

In February this year, the Supreme Court agreed to hear a plea by BJP MP Subramanian Swamy seeking a direction to the Centre to declare Ram Setu as a national heritage monument. Ram Setu, which is also known as Adam’s Bridge, is a chain of limestone shoals between Pamban Island or Rameswaram Island, off the south-eastern coast of Tamil Nadu, and Mannar Island, off the north-western coast of Sri Lanka.

Talking about the film, Ram Setu is an action-adventure drama that tells a story rooted in Indian cultural and historical heritage. It stars Akshay, stars Jacqueline Fernandez, Nushrratt Bharuccha and Pankaj Tripathi in key roles. The makers have wrapped up shooting for their upcoming film in January this year and the film’s poster was dropped a few months ago. It is scheduled for a theatrical release on October 24.