Skip to content
HomeEntertainmentBTS: Furious ARMY trends ‘Be Fair To Jimin’ as the With You singer’s demo version doesn’t make it to BTS Proof’s 3rd track list [Read Tweets]

BTS’ anthology album Proof is dropping in June. It’s a compilation of BTS members – RM, Jin, Suga, J-Hope, Jimin, Taehyung and Jugkook‘s discography in the last 9 years and also includes three brand new titles. Over the last couple of days, Big Hit aka HYBE has been dropping the track list of BTS Proof and finally, the 3rd and the last track list is out. However, it seems BTS ARMY and Jimin aka Park Jimin stans are not happy. It is because Jimin’s Demo version of the song does not include in the 3rd track list which has Demo versions of songs of other BTS Members. Also Read – Sonakshi Sinha’s BIG Secret is out and it’s not what we all thought [Read Deets and Watch Video] 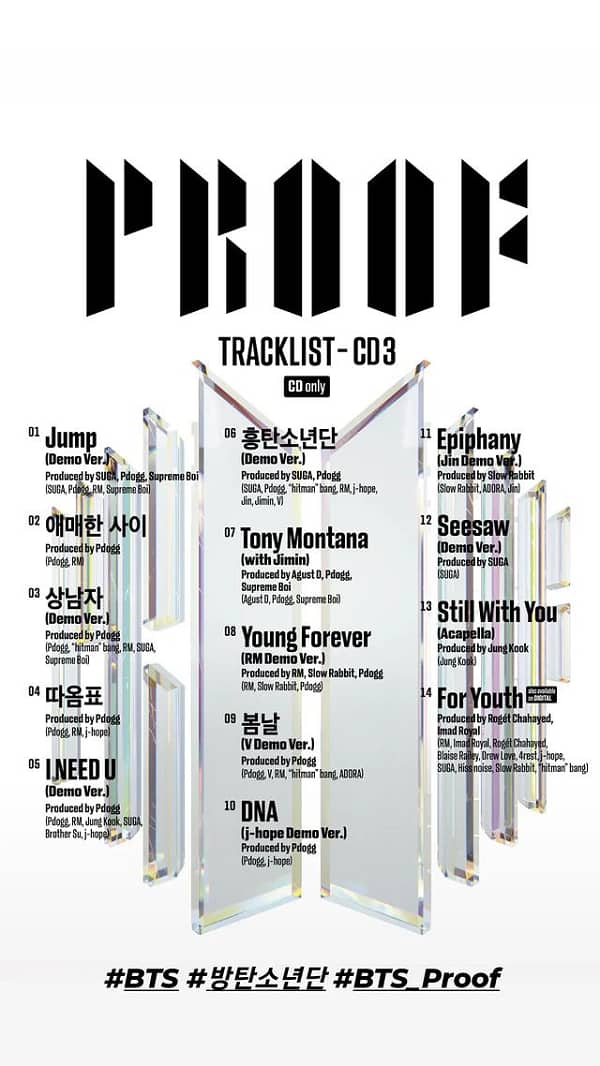 As y’all can see, the list has demo versions of songs by other members but not of Jimin. Hence, ARMY has been asking for a demo version of Baby Mochi too. A lot of them are rooting for the Fake Love demo version by Jimin. Check out the tweets below:

Why jimin is the only bts member who doesn’t have his demo version ? Where is the demo version of promise the most streamed and successful solo song in SoundCloud history?
WHAT WE NEED IS THIS FAKE LOVE DEMO OF JIMIN!@HYBEOFFICIALtwt@bts_bighit@BIGHIT_MUSIC
#BeFairToJimin

jimin’s the only member without a demo when he has done several ones , he is also not being credited in tony montana when he wrote his own verse !

THIS IS SO UFAIR HE DOES NOT DESERVE THIS TREATMENT !#BeFairToJimin

Why jimin is the only bts member who doesn’t have his demo version ? Where is the demo version of promise the most streamed and successful solo song in SoundCloud history?
WHAT WE NEED IS THIS FAKE LOVE DEMO OF JIMIN!!!@HYBEOFFICIALtwt@bts_bighit@BIGHIT_MUSIC
#BeFairToJimin

Where is Jimin’s solo demo?

All BTS members have solo demo versions included in CD3 of #BTS_Proof. Aside from demos he had worked on, he also has Promise, the most streamed song in SC, which equally deserves to be in an album.#BeFairToJimin

softest human. who never mind anything. the best human being, who never complains even though he is always compared. Jimin I wish you the best ? #BeFairToJimin pic.twitter.com/KM9tb6yPv0

Why is HYBE treating Jimin differently? Don’t they have an Oto7 Policy? We’re they lying to us? #BeFairToJimin

Meanwhile, this week Billboard’s top 10 Hot Trending Songs list powered by Twitter was topped by Jimin’s With You. The song is an OST that the BTS’ member sang alongside singer-songwriter Ha Sungwoon. It included other BTS and K-pop idols’ songs such as Butter, That That (PSY ft. Suga), Yours, Super Tuna, Stay Alive, But You (IKON), Bazinga (SB19), Christmas Tree, Maniac (Stray Kids).