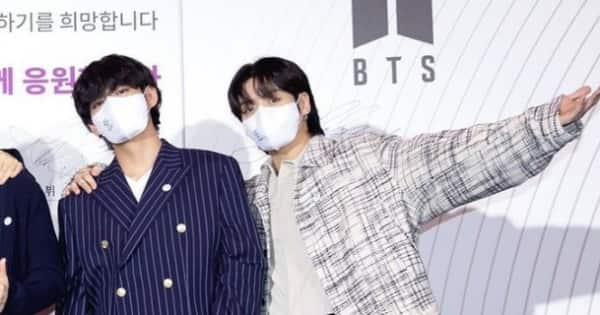 BTS ARMY got to see OT7 together at the press conference for the Busan World Expo 2030. They will be honorary ambassadors for the same. The town of Busan is making a bid for the World Expo, and BTS will help them in promoting Busan and Korean culture the world over. It is no secret that Korean entertainers like BTS, Squid Game makers and Parasite movie have done lot to give the country global recognition. The BTS boys were seen at the press conference that was held at the HYBE head quarters. All of them were dressed in semi formals and looked too cute. The officials also said that Jungkook and Jimin were Busan boys. Also Read – Top Bollywood actress has not yet registered her marriage? Is the husband gay?

Now, a video of Taehyung from the World Expo announcement is going viral. It is quite hilarious. We can see that an official gets a photo moment with the Winter Bear singer. He takes his hand and raises it up like he has won a bout of boxing. The whole video is hilarious as Kim Taehyung aka V has no idea of what is happening. He looks so flabbergasted. ARMY is laughing how the man saw his chance and took it. They feel that someone is his family must have been biased towards Taehyung and instructed him to get a special picture with the Winter Bear singer. Also Read – Shah Rukh Khan to Hrithik Roshan; Bollywood actors who got married much before the ‘ideal age’ of marriage for men

in that moment, we were all this man, celebrating taehyung just for his existence alone. you go dude sir !! pic.twitter.com/9gfRLn8R7A

Omg! Hus the guy.. Was Tae the only guy.. He approached like that..

The man saw his chance and took it. ?. You know he’s going home with zero regrets and I’m here for it! I mean… it’s Kim Taehyung, who can resist?????❤

TAEHYUNG YOU ARE SO UNSERIOUS MY STOMACH HURTS

He was confused pls he’s so cute ? pic.twitter.com/iHq1N3xsS0

We can see that it is quite funny. Kim Taehyung aka BTS V is known for his Tata Mic face. This is one encounter that seems to have caught him unawares. BTS boys are always surrounded by a number of bodyguards and very rarely does something see something of this sort! Also Read – Brahmastra: Ayan Mukerji OPENS Up about Shah Rukh Khan, Deepika Padukone’s cameos; REACTS to ‘Love Storiya’ being trolled in Kesariya