Well, the scene that Charu shared on her Instagram story shows Neetu Kapoor’s character Geeta Sahni seeking a divorce from her husband Bheem Sahni aka Anil Kapoor due to a lack of trust and respect for each other. Neetu’s character aka Geeta says, ‘Shadi ka matlab nahi samjhe aap. Shadi ka matlab pyaar aur compromise hai. There will be togetherness and there will also be differences. But in a marriage, if there is no respect and trust, the marriage doesn’t last. And I have lost my faith in you.’ Also Read – Charu Asopa and Rajeev Sen’s daughter Ziana diagnosed with hand-foot-mouth disease; netizens praise actress for handling the situation all alone [View Reactions] 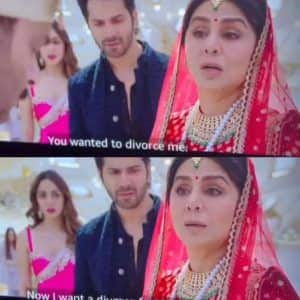 By sharing these videos, Charu has actually hinted at her own messed-up life with her husband Rajeev. Charu recently revealed that her daughter Ziana was diagnosed with hand, foot, and mouth disease. In her vlog, Charu spoke about how she is all alone who is managing everything and it is not easy at all. Charu also thanked all her fans and well-wishers for their prayers and said that Ziana is doing better now. Charu Asopa and Rajeev Sen are oen of the most trending entertainment news.

Charu and Rajeev accused each other of several allegations. Rajeev claimed that he had no clue about Charu’s first marriage and she broke his trust. She told ETimes TV that Rajeev appreciated her for moving on from her past and making it on her own in Mumbai. She even revealed that she had initiated legal paperwork for divorce from Rajeev. The couple is staying separately now.