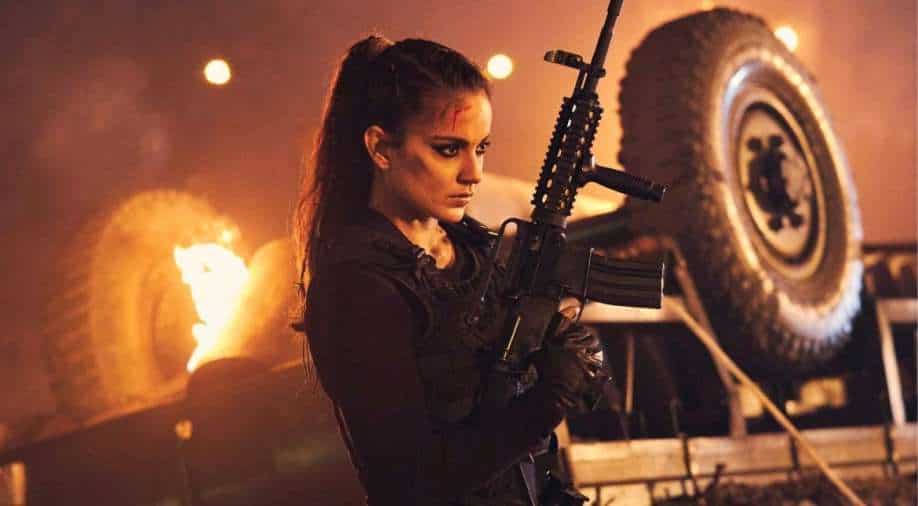 Evoking the image of an Indian Black Widow, the fiery and enigmatic Agent Agni aka Bollywood actress Kangana Ranaut is set to enthral the audiences in her movie ‘Dhaakad’.

She recently visited the Capital along with co-actors Arjun Rampal, Divya Dutta, producer Deepak Mukut and director Razneesh Ghai. Kangana and the entire cast talked about their roles and the actress emphasised on the challenges in portraying her fierce and daring personality.

She spoke about how the movie will compete with Kartik Aaryan’s ‘Bhool Bhulaiyaa 2’ at the box office.

Speaking about her look and how she prepared for her role, Kangana shared: “I would like to thank our director for taking up this project and doing a movie with me while everyone suggested to him, ‘how you can do your first movie with Kangana’. I tried to give my best.”

She added while pointing toward the director: “He was most apprehensive about my weight gain due to ‘Thalaivii’ and always asked me, `You will lose this weight right? You will lose? and I used to respond, `Yes I will,” she laughs and adds: “Even I used to think whether I will be able to be in shape again for this role after looking at his face.”

Razneesh added what was on his mind when he took up this project and Agent Agni’s character: “I wrote the stories for two other guys to portray physically strong woman characters and I wanted to physically push Kangana as she had done `Thalaivii` and so it was a gradual process to lose weight. I wanted to inspire children and today`s generation with this movie.”

Kangana shared: “I wanted to use fake guns for this movie as I got hurt while shooting for ‘Manikarnika’ but my director was keen that I should use real weapons. As far as my training is concerned, since childhood, I have been learning from my action master Surya Narayan ji, from whom I am learning from the age of 16 or 17, but never got such a role except a few like `Krish` or `Manikarnika`. Moreover, for the movie, a crew came from Hollywood and also from Korea for the training. So, it`s a team effort and no single person can be given the credit.”

She claimed: “This movie has the longest fight sequence in Hindi cinema, approximately 14 minutes.”

Continuing the conversation, Arjun who will be seen as Rudraveer, an international human and arms trafficker in the movie, throws light on his character.

He defined his personality as ‘stylish, brutal, lean, evil-someone without feelings’. “I don’t think anybody has presented me like this. I am returning to the big screen after a long hiatus, and I don`t think I could have had a better opportunity and a better director to come onboard and do this wonderful film.”

Divya briefed about playing a grey shaded character, Rohini in the movie: “Dhaakad is a really special movie for me. This is especially true because sometimes, one is able to receive a complete package. This is a totally different sort of role. It`s a negative one. I got the opportunity to participate in numerous crazy mean streaks, which was really fun.”

“There were some amazing scenes that I think I will remember for the rest of my life. It`s something really beautiful. It`s so nice to be cast against your type, and that was really wonderful. I am so glad I have the most fantabulous co-stars with me. I think I will look back and have a broad smile,” she added.

Talking about the competition between ‘Dhaakad’ and ‘Bhool Bhulaiyaa 2’, Kangana said: “We cannot always get a solo release. It isn’t like that these films are releasing on 5000 or 7000 screens. They both can simultaneously come and do well at the same time.”

On many Indian movies adapting from foreign films and ‘Dhaakad’ having original content, Kangana said: “Definitely this is an original idea.”

Arjun Rampal added: “I would like to add something. Razneesh and I were talking recently. He received a call from the action directors. They said that the action scenes looked so amazing that they wanted to enter the movie for the action awards that are held in Hollywood.”

The actress also shared her perspective about South films doing well and getting a good response from the audience in comparison to Bollywood films.

She said: “I have been the biggest cheerleader for South Indian films. If you see, I was the first one to start the topic of “our regional cinema should do well. We all should do something by coming together to save our screens from Hollywood or international films, because the Italian, French and German and English film industries have single-handedly destroyed everyone. We must promote South, Malayalam, Kannada or Punjabi films. We should be scared of the American film industry.”

On the question of women-centric movies being made less in the industry, Kangana said: “We should look at a film just as a film. We shouldn`t attach sexuality to it.

Divya also asserted: “I think we should cease demarcating women-centric and men-centric movies. Once this happens, normalcy will come by itself.”

Arjun concluded: “We have come from an era when women had limited rights and there was no equality. Ever since I’ve arrived in the film industry, I’ve done at least one women-oriented movie per year. I think that this is because my support system is primarily comprised of women, which includes my mother, my sister, and now my daughters.”

It features Kangana Ranaut as Agent Agni in the lead role with Arjun Rampal, Divya Dutta and Saswata Chatterjee in supporting roles.