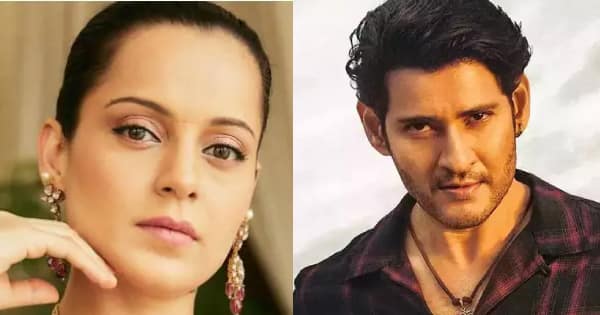 Kangana Ranaut is currently on her toes promoting her upcoming film Dhaakad. The trailer of the film has received much appreciation from all and now the actress is trying her best to promote her film in the best possible manner. As we all know, Kangana wears her thoughts on her sleeves and never minces words. Recently, she was asked to comment on Sarkaru Vaari Paata star Mahesh Babu’s statement ‘Bollywood can’t afford me’. His remark created quite a stir in the industry. Also Read – Priyanka Chopra is on a mission to change the perception of India; mom Madhu reveals, ‘She wants to educate them’

Over this Kangana Ranaut stated that she agrees with him. “He (Babu) was right that Bollywood can’t afford him, this I agree (with). I know for a fact that many filmmakers have approached him,” said the Dhaakad actress. She further mentioned, “His generation has singlehandedly made the Telugu industry the number one film industry in India. Now, Bollywood definitely can’t afford him. I don’t see why this should be made into a huge controversy.” Also Read – Anupamaa: Anu and Anuj’s chemistry during Haldi ceremony sets the internet on fire; MaAn fans say, ‘Maryada lines are slowly fading away’

It was at the trailer launch of Major in Hyderabad that Mahesh Babu had said, “I may sound arrogant, I did get a lot of offers in Hindi. But I think they can’t afford me. I don’t want to waste my time. The stardom and love I have here in Telugu cinema, I never thought of going to another industry.”

Later, the actor had clarified that he has respect for all languages and he loves all forms of cinema. However, the damage had already been done and quite a few were left surprised by his remarks.

Among all, filmmaker Ram Gopal Varma too was the one to react to Mahesh Babu’s statement. To India Today, he said, “It is his choice as an actor. But I honestly didn’t understand what he meant by Bollywood can’t afford him. I am still unable to figure out what he meant by that because the point is, if you see the recent South Indian films, they were dubbed and released and they made whatever money they did.”