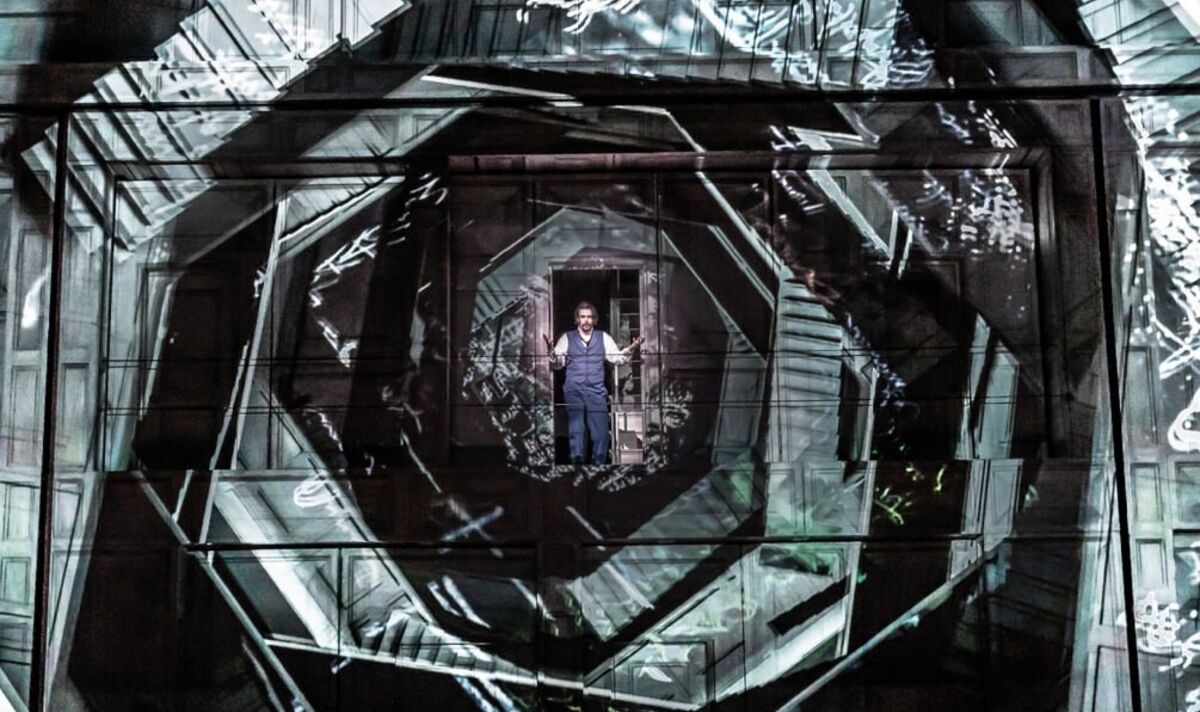 With some impressive lighting effects, including the appearance of hidden staircases all over the place, it offers some visual treats, but Holten’s attempts to improve the dramatic power of the opera are more dubious. The story of the unscrupulous Don Giovanni, aided by his long-suffering servant Leporello, trying to add to his list of thousands of female conquests is a typical scenario for a comic opera, but trying to turn it into a psychodrama with some unconvincing changes in characterisation seems to me to muddle the delightful simplicity of the plot.

As well as a strong suggestion that Giovanni’s women may be as much to blame as the Don himself, we are treated to the occasional unconvincing appearance of ghostly characters wandering across the set – presumably the ghosts of the victims of Giovanni’s past seductions – though this is never made clear.

Also, traditional productions end with Giovanni thrown into the flames of Hell by the re-animated statue of the Commendatore whom he had killed at the start when making his escape after seducing the poor man’s daughter.

In this production, however, his punishment seems only to be a hell of loneliness and no more women to seduce.

Perhaps for Don Giovanni this is a fate worse than death, but despite some nice lighting effects that turn everything black, this is far less dramatic than the usual flames from Hell.

While the production, of which this is the fourth revival at Covent Garden, is rather dodgy, Mozart’s music is as good as ever and the performers are as excellent as one has come to expect of the Royal Opera.

Italian baritone Luca Micheletti gave a splendidly suave performance in the title role, while the piercingly clear voice of Swedish soprano Maria Bengtsson as Donna Anna marked her out as the best of his conquests.

Perhaps the best singing of all, however, was that of the American tenor Charles Castronovo as Don Ottavio who only has two arias in the opera, but delivered them quite beautifully.

The best comic acting, however, was undoubtedly that of British baritone Christopher Maltman who brought a delicious combination of mischievousness and cowardice to the role of Leporello.

A few months ago, we saw Maltman at Covent Garden as the villainous Iago in Verdi’s Otello. To play two such contrasting roles so convincingly is evidence of this singer’s versatility.

After a hesitant start in which the singers and orchestra seemed in danger of losing touch with each other, German conductor Constantin Trinks took firm charge and let us all revel in Mozart’s glorious music.

Whenever I see an imaginative production of any of this composer’s comic operas, I find myself asking the most important question of all: Would Mozart have liked it?

I definitely have my doubts about what his reaction to Kasper Holten’s psychodrama might have been and I suspect that his librettist Lorenzo da Ponte would have had even stronger reservations.