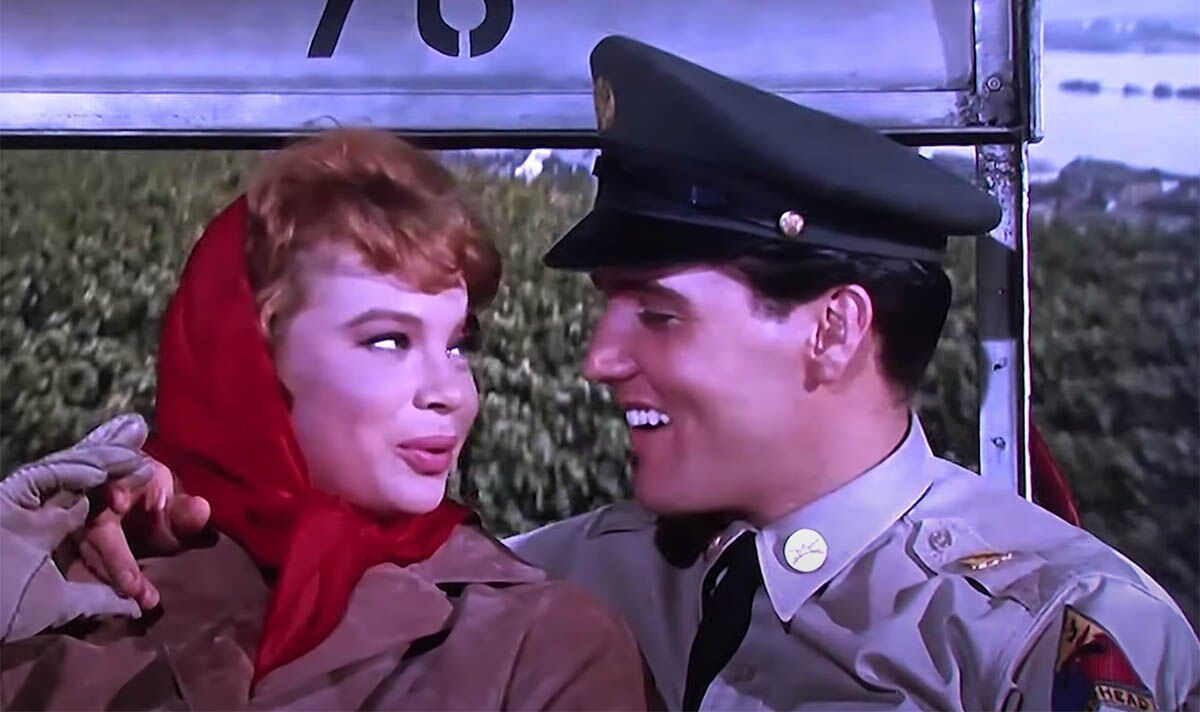 Appropriately enough, GI Blues was the first film that The King shot when he returned from military service in Germany early in 1960. Although he was officially still dating actress Anita Wood at the time, we now know that he had met and fallen in love with teenager Priscilla Beaulieu while overseas. Even so, Elvis would, as always throughout his movie career, continue to actively pursue his beautiful co-stars. In this case it was South African dancer Juliet Prowse, who was already in a relationship with Frank Sinatra.

GI Blues was  a major event when it was filming, with everyone waiting to see what Elvis would do next in his career after military service. He was the biggest young star in the world at the time and even royalty was desperate to meet him.

Princesses Margrethe of Denmark, Astrid of Norway, and Margaretha of Sweden visited him at Paramount Studios – and they still weren’t his most famous encounter. The King’s one and only meeting with Marilyn Monroe also took place backstage at the Paramount lot in June 1960. There are even claims they spent one brief night of passion together.

But The King’s main fling on GI Blues was his co-star Prowse. He played US Army Specialist 5 Tulsa McLean opposite her nightclub dancer Lili, and their onscreen romance was mirrored behind the scenes.

Prowse would also join Sinatra when he was working in Las Vegas. Their relationship intensified and he proposed to her in 1962.

The singer was notoriously possessive when he was married to Ava Gardner and even reportedly had his Mafia contacts rough up Marlon Brando when he caught them in a dressing room together. Their turbulent marriage had ended in 1957, partly because of various infidelities. So, it seems strange that he would allow someone as famous as Elvis to sleep with his girlfriend.

Prowse, who was 24 at the time,  said: “Frank and I are mature people. We don’t go for this teenage bit about going steady and all that jazz.”

In fact, they didn’t go steady or otherwise for long after the engagement and soon broke up. She later admitted: “I was as much flattered as I was in love. He was a complex person, and after a few drinks he could be very difficult.”

The actress hoped to focus on her film career but bigger roles eluded her and she left Hollywood to focus on the stage. Ironically, even though her voice was dubbed in GI Blues, she was a huge hit when she took the lead in a 1967 London production of the musical Sweet Charity. It also ran in Las Vegas where she would build a successful second career as a cabaret star.

Prowse was married to soap actor John McCook from 1972-1979 and had one son Seth. She died of pancreatic cancer on September 14, 1996, just days before her 60th birthday.