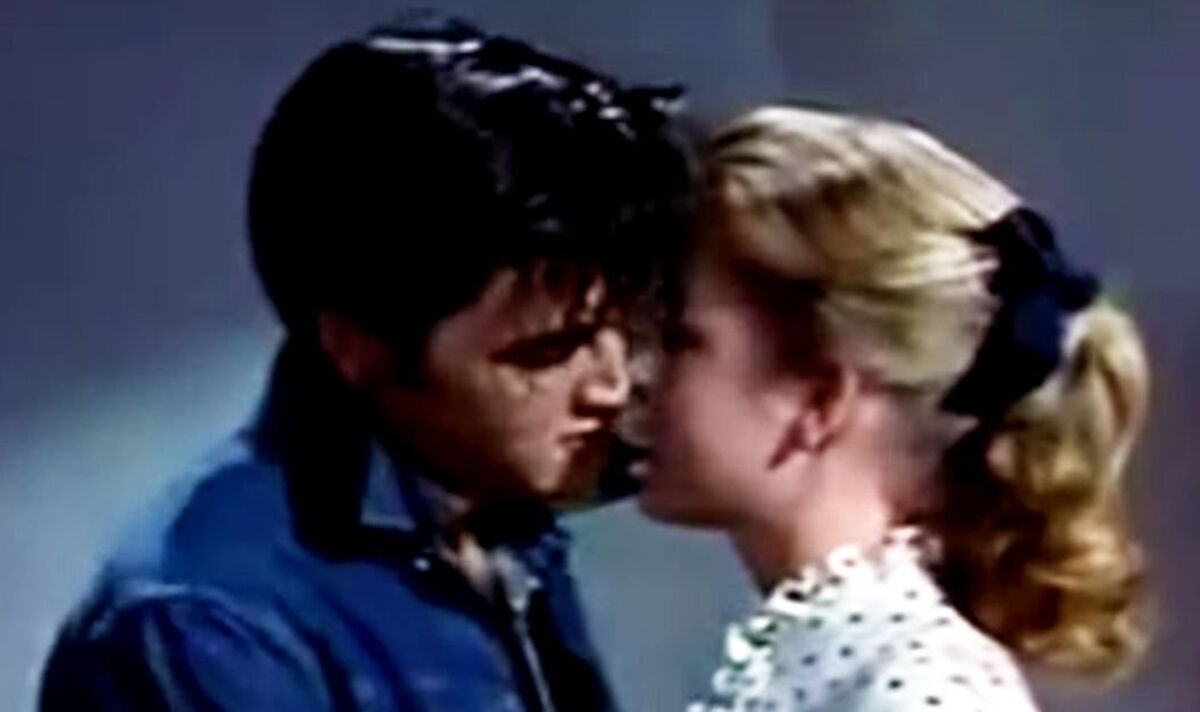 Hart, who turns 84 later this month, was once billed as the “next Grace Kelly” but these days is most famous for being the only nun who is a voting member of the Academy of Motion Picture Arts and Sciences. The clean-cut girl from Chicago was just 19 when she made her big-screen debut in 1957’s Loving You. Elvis, himself, was still only 22 but already a major recording star and budding actor. He had already played a supporting role in 1956’s Love Me Tender but was immediately such hot property in Hollywood he took his first leading role in Loving You as deliveryman Deke Rivers, an aspiring singer who romances Hart’s Suzie, “the girl who loved him too much to hold him back.”

Apart from hitting headlines when she took holy orders, Hart also holds a place in cinema history as the actress who gave Elvis his first proper on-screen kiss.

Hart recalled: “It’s the last scene of the film, but when you walk in on set, you’re told, ‘This is the first thing you’re going to do.’ I remember I had to put my arms around him and kiss him. There were about 100 people on the soundstage. Seconds into it, the director, Hal Kanter, yells ‘Cut! I thought, ‘Oh no, how can I kiss wrong?’

“He immediately asks for the makeup man to come over to fix me up. I thought, ‘What’s going on? That’s it, it’s over for me.’ Well, Hal tells me, ‘Dolores, you’re blushing in your ears. They’re red. We need makeup.’ I was so embarrassed.”

And then it was Elvis’s turn.

The two became close during filming and their chemistry was so palpable that she was invited back to star opposite him again the following year in King Creole.

She had nothing but praise for The King’s behaviour and old-fashioned manners: “When I first met him, he was just a charming young boy with long sideburns. He couldn’t have been more gracious. He jumped to his feet and said, ‘Good afternoon, Miss Dolores.’ He and Gary Cooper were the only ones in Hollywood who called me that.”

King Creole was one of the few to give Elvis a deeper, darker role as Danny, a young club singer embroiled in the seedy gangland underbelly of New Orleans.

The King always cited it as one of his favourite performances and Hart said he deserved better than he got from Hollywood in terms of roles and the way he was used.

Dolores said: “Elvis told me that this was the first picture where he’d really had a good acting part. He really wanted to be the next Jimmy Dean.

“He could have been done it, too, because he’d learned to play a character and not just himself. But his manager was just thinking about money and everything he did after that was just with girls and stuff.”

Dolores was right there as Elvis’s fame was already starting to take over his life: “By the time we did our second film, we couldn’t walk down the street because there were so many people waiting for him, just wanting to touch him.”

Incredibly, she was about to go through an even more extraordinary transformation of her own.

Dolores said: “It was supposed to be a welcoming retreat from New York where I could reflect on what was going to be the next step in my career. But I wasn’t expecting just how peaceful it truly was. I found inner certitude. I felt like this is where I belonged. It became more than just a retreat.

“It’s the kind of feeling you get when you meet the person you’re going to marry. The more I came to visit the more it came calling to me. And the more I knew God was present to me in a very special way that I couldn’t deny.”

In fact, she was engaged to be married, to Los Angeles architect Don Robinson.

Dolores ended the relationship and, at 24, walked away from Hollywood forever. In 1963, during the press tour for her final movie, Come Fly With Me, she gave away all her worldly possessions and entered the convent. She told Come Fly With Me co-star Karl Malden it was “an affair of the heart.”

Robinson never married and would visit her there every Christmas and Easter until his death in 2011.

Hart withdrew from the world until she made a sensational comeback at the Oscars in 2012 when an HBO film based on her story, God Is the Bigger Elvis, was a nominee for the 2012 Academy Award for Best Documentary (Short Subject).

The former actress appeared on the red carpet in her habit and used the publicity to help raise awareness of the fundraising efforts to save the crumbling buildings of the monastery.

The following year, she released an autobiography, The Ear of the Heart: An Actress’ Journey From Hollywood to Holy Vows.