Filmmaker Hansal Mehta married his longtime partner of 17 years, social worker Safeena Husain, in an impromptu ceremony. On Wednesday, the director took to his Instagram handle and shared a series of pictures of the ceremony, in which the newlywed couple can be seen signing the wedding documents and hugging each other.

The wedding took place at Taj Campton Place in San Francisco, California, in the presence of family and friends. He captioned the post and wrote, “So after 17 years, two children, watching our sons growing up and chasing our respective dreams we decided to get hitched. As always in life, this was also impromptu and unplanned. Our vows, however, were to be truthful but for this little ceremony, they would never have been stated. Ultimately love prevails over all else. And it has…”

For the wedding, Hansal wore a casual tee and denim with a beige-brown blazer, whereas Safeena donned a soft pink salwar-kurta and paired it with a beautiful embroidered dupatta. Congratulatory wishes poured in from filmmakers Vishal Bhardwaj, Anubhav Sinha, actors Rajkummar Rao, Manoj Bajpayee and Nimisha Sajayan, and chef Ranveer Brar, and his followers. 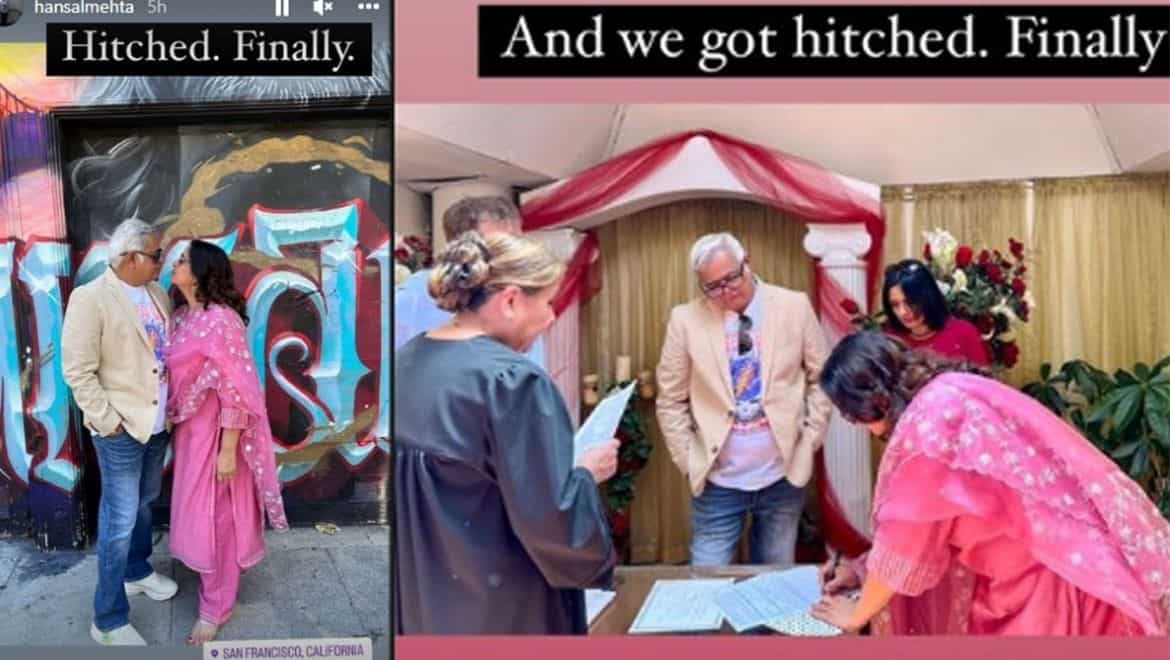 Actor Pratik Gandhi commented, “This is lovely Well it`s inspiring and pressurising too. @bhaminioza is already giving me hard looks.” Rajkummar Rao, who has worked with Hansal in ‘Shahid’, ‘Omerta’ and ‘Citylights’, congratulated the couple and wrote, “Congratulations my fav couple. You guys complete each other. I love you both.”

On the other hand, Filmmaker Vishal Bhardwaj wrote, “Lovely. Mubarakaan.” Huma Qureshi commented, “Awww”.A fan commented, “Wow. Your love story is like a story out of a film, probably an idea for your next web series? God bless!” Another said, “This is so beautiful I am crying.”

Also Read: Aishwarya Rai’s modelling bill from 1992 goes viral online; guess how much she was paid?

Meanwhile, on the work front, the filmmaker is currently working on many projects at the same time after the success of ‘Scam 1992: The Harshad Mehta Story’. He revealed on Tuesday that the lead part in ‘Scam 2003: The Telgi Story’ had been cast. He is also working on ‘Scoop’, a Netflix original series, and ‘Captain India’, a feature film starring Kartik Aaryan. He also directed the action movie ‘Faraaz’ with his son Jai Mehta and is working on a film with Kareena Kapoor.

Safeena is a social worker and the founder of the Educate Girls non-profit. She is the late actor Yusuf Hussain`s daughter.