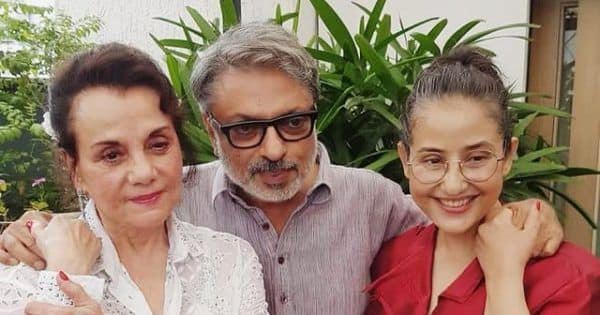 Sanjay Leela Bhansali’s Heeramandi is one project that is making a lot of buzz. It is going to come on Netflix as a web series. Buzz is that the shoot will start with Manisha Koirala and Aditi Rao Hydari doing a mujra sequence. There is a lot of speculation on whether yesteryear diva Mumtaz is going to be in the series or not. Manisha Koirala shared a picture with Sanjay Leela Bhansali and Mumtaz on her Instagram. Now, Bollywood Hungama called up Mumtaz to ask if she is indeed doing the epic project. The actress tactfully said that this question should be posed only to Sanjay Leela Bhansali. Also Read – The Gray Man star Dhanush OPENS UP on working with Russo Brothers; ‘I had to deliver so that they come for more talent in India’

But she admitted that she did meet Sanjay Leela Bhansali at his office and the meeting went well. Mumtaz told Bollywood Hungama that it was premature to conjecture if she was a part of Heeramandi. She was quoted as saying, “This whole speculation business started when Manisha Koirala posted a picture of us together. But like I said, I can’t say anything on this until Mr Bhansali makes an announcement.” Mumtaz took a retirement from films after she married Uganda-based businessman Mayur Madhvani. His family is one of the richest in Africa. The couple came to London after Idi Amin made life difficult in the African country. Also Read – Anushka Sen shares how she connected with Krystle Dsouza; picks her favourite host among Salman Khan, Rohit Shetty, Karan Johar [EXCLUSIVE]

The actress told the portal that this could be her last ever screen appearance. She said she wants it to be memorable for the audience. She even told Bollywood Hungama, “I am aware of the magic that Mr Bhansali creates with his heroines. Who wouldn’t want to be in his film?” Mumtaz was also offered to come as a guest in a reality TV show it seemed she asked for an exorbitant amount, which led to the channel dropping the plan. She is mother to two daughters. Her recent pics with Dharmendra went viral. Also Read – The Idol: Blackpink star Jennie Kim spotted with cornrows; under fire for cultural appropriation after bandmate Lisa was called out for the same issue