Skip to content
HomeEntertainmentHrithik Roshan on working in ‘Vikram Vedha’ Hindi remake: ‘We were creating, not recreating’ 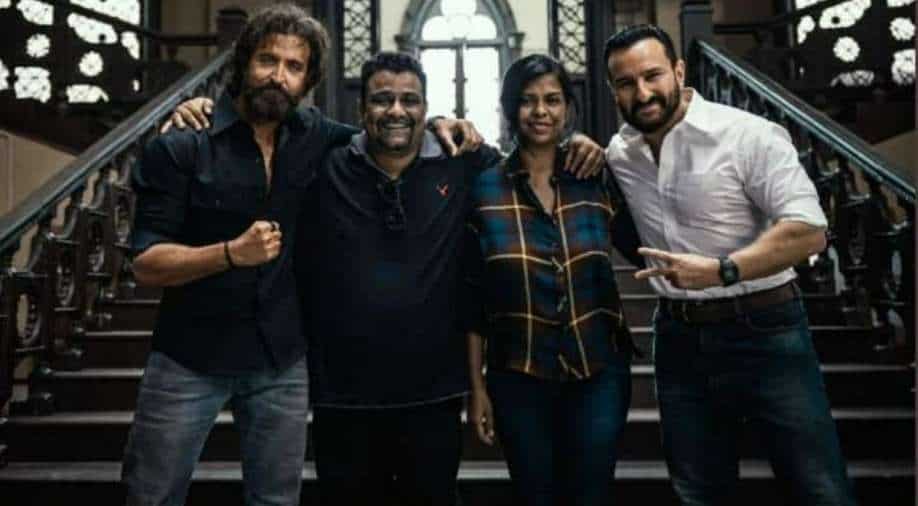 In just a few days ‘Vikram Vedha’ will hit the theatres and fans will get to see Hrithik Roshan and Saif Ali Khan share screen space, once again, after almost two decades. Promotions for the film are going on in full swing and recently, both the stars along with the director duo Pushkar-Gayathri reached Gurugram to talk about their Hindi debut movie and answer some pressing questions.

When asked about their most memorable behind-the-scenes moments from the shooting days, director Gayathri shared, “I have something. They nearly enjoyed working in all of the scenes but in one scene, I sensed an inherent joy. There is a scene where they had to eat kulcha nihari. So, they were in tight diet and they workout and all. And, while eating that I could see a soulful joy coming out of their eyes.”

To which Said humorously added, “Lucky, not too many takes. We tried to get it right the first time.”

Talking about the film’s box office clash with Mani Ratnam’s ‘Ponniyin Selvan 1’, director Pushkar said, “We do our part, they do their part. So, I hope people go and watch both movies. I will be going and watching that (PS 1) for sure.” To which, Hrithik added, “I have not read the book so for me it’s just ‘Vikram Vedha’. That’s all”

The director also shared how the Hindi version of ‘Vikram Vedha’ is different from the 2017 Tamil film and revealed why he chose to remake it in Hindi. Giving an example of Arthur Miller’s play ‘Death of a Salesman’, Pushkar stated, “That play has been staged 200 times, 500 times all over the world. The text remains the same but when you bring in a fresh set of actors, the whole production changes and what we see on the stage changes too. So we approached the idea of doing the film again like that. The text remains the same, which is the script that we wrote long back but Hrithik and Saif bring their own flavour to the roles.”

To which, Gayathri added, “Every day on the shoot, we never felt like we are recreating a scene. We had long discussions with actors, how they look at a scene. And that has been the most exciting part of the film. If you see the film, the soul is the same but the movie is completely different from the first film.”

Hrithik agreed with the husband-wife director duo and said, “There were so many times when we found ourselves stuck, we used to think what to do next, how to get to that beat. Even though the film is already made and we could recreate the same thing but that’s not where we were coming from. Oftentimes, we would find motivations that would propel Vikram and Vedha,” while adding, “we were creating and not recreating.”

Meanwhile, rumours were also rife that Hrithik and Saif are not promoting the film together due to some differences. But, it was recently revealed that it was all part of the marketing strategy as the two stars share a camaraderie like none other. When the press asked them about their experience of working with each other, they only had words of praise to say.

Speaking about Hrithik’s good looks and dedication, Saif said, “I was both excited and nervous to work with Hrithik. I have seen his films and sometimes it is very difficult to look at anything else. There could be beautiful girls around him or a serene sunset on screen but you can’t stop looking at this man. You know what I am talking about. So, I thought I might be in a lot of trouble because people would wonder why he has done a film with Hrithik when everybody will just look at him. But in all seriousness, he is a brilliant actor and it was fun.”

Hrithik, on the other hand, complimented Saif for his calm and composed nature. He also shared that he appreciates how blunt and straightforward his co-star is. “I never have to guess what’s going on in his head because he speaks his mind all the time. I really want to be like him. Working with him, was a lesson in grace, composure, and being true to oneself.”

Watch the trailer of the film here:

‘Vikram Vedha’ is a remake of Pushkar-Gayathri’s 2017 Tamil hit of the same name, which had R Madhavan and Vijay Sethupathi playing the lead roles.

On September 30, the movie will release across theatres in India. Pre-booking of the shows has already begun.