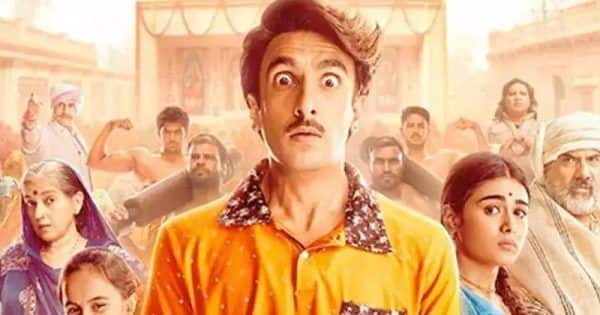 In the tsunami of South Indian films that are taking over the box office, here comes Ranveer Singh‘s Jayeshbhai Jordaar. The actor has come a long way since his debut movie Band Baaja Baarat. He has a phenomenal filmography that boasts of films like Bajirao Mastani, Padmaavat and more. But his last film 83′ wherein he essayed the role of Kapil Dev turned out to be a box office debacle. Yet, he is here to revive the shaky stance of Bollywood in the war with regional films. As the name suggests, he is indeed a Jordaar performer but is he powerful enough to shoulder the dubti naiya of Bollywood? Well, we don’t know about that but here’s something that will help you decide whether to watch the film in the theatres or not. Grab on the popcorn and scroll on to read the full review. Also Read – Jayeshbhai Jordaar Movie Review: Ranveer Singh’s performance leaves netizens in awe; fans say, ‘best work till date’

The trailer of Jayeshbhai Jordaar gave away the plot. It is about a timid Jayeshbhai who lives in Pravingarh, Gujarat along with his family members. He has a daughter with wife Kinjal played by Shalini Pandey. His father played by Boman Irani is the sarpanch of Pravingarh and he wants a ‘kuldeepak’ to his family. Jayeshbhai and Kinjal go through 6 abortions after the birth of their first child, and yet the seventh time, Kinjal concieves a girl child. With guilt in his heart for killing his 6 unborn, Jayeshbhai takes up the charge of his life and refuses to let anyway take decisions for him. Not even his parents. To save his unborn and look after his daughter and wife, Jayeshbhai turns a hero that nobody expected him to be. And then follows an interesting journey filled with comedy, action, drama and tons of emotions. Also Read – Filmy Friday: When Anushka Sharma hit Ranveer Singh for his ‘Want your a** pinched?’ comment on national TV

Ranveer Singh, Ranveer Singh, Ranveer Singh! That’s sums up everything. The actor has progressed with each film and Jayeshbhai Jordaar is yet another classic added to his list. From mannerism, accent to emotions – he has got everything right. He simply flows effortlessly from one scene to another like maska spreads on bread. Of course, there are a few times when he appears to be a litte overboard. But he is Ranveer Singh, so that’s what one expects while watching his movies. Debutant director Divyang Thakkar is also to recieve credit for this. Without any glitches, the movie has been shot exceptionally well. It is needless to say that the supporting cast of Boman Irani and Ratna Pathak Shah have delievered their best as always.

While the film manages to delivery a strong message, it falls short on delivering the message that says one can change the world without violence. At the end, Jayeshbhai has to turn an action hero and that contradicts with his personality. Plus, the ‘Jaadu ki Pappi’ will take you back to Munna Bhai days that will make you wonder why. But apart from that, the film appears to be a total entertaining, masala drama that the audience loves to see.

BollywoodLife gives Jayeshbhai Jordaar 3 stars and lauds Ranveer Singh for taking up yet another challenging role that is so different from the macho roles he has played in his period and cop dramas. The film runs high on emotions so we advice taking a box office of tissue. It a good watch to make your weekend better.