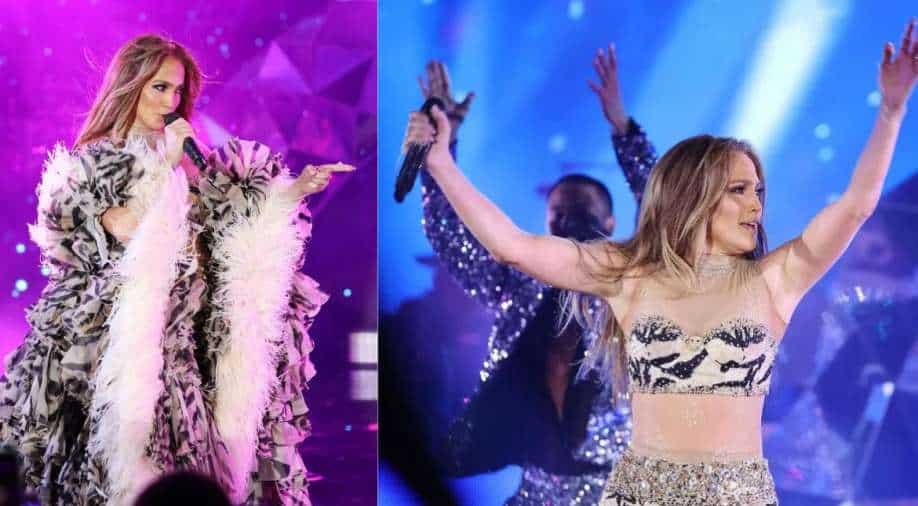 Multifaceted star Jennifer Lopez is back to work after enjoying a romantic honeymoon in Paris with her husband Ben Affleck. Lopez, 53, appeared at the LuisaViaRoma x Unicef charity gala in Italy’s Capri on Saturday. The singer opened the show with her hits ‘If You Had My Love’ and ‘Waiting for Tonight’, from her 1999 album ‘On the 6’.

The A-lister’s stage performance was the first since her marriage to actor Ben Afflick, 49. The couple tied the knot in an intimate nuptial in Las Vegas.

Lopez rocked the stage wearing a custom-made tiger-striped Roberto Cavalli by Fausto Puglisi. The event took place at the Certosa San Giacomo, a 14th-century monastery. The star’s ensemble featured dripping feathers. She paired her outfit with towering white platform heels and a mini bedazzled green and silver purse from Louis Vuitton. Lopez wore her brunette tresses clipped halfway at the back, opting for a bohemian look.

Furthermore, statement colourful crystal earrings added much drama to her entire look. She opted for a dramatic dark eyeliner and voluminous lashes, as well as a pink lip colour. For her second outfit of the evening, the singer wore a nude fishnet embellished bodysuit that was covered in shimmering crystals, teaming it up with matching fishnet tights.

She started the concert by addressing the crowd—”We’re giving disco tonight.” The LuisaViaRoma-hosted event had raised about 8 million euros to help the Ukrainian and Syrian humanitarian relief operations.

“My mom used to watch those award shows, those big galas — this is like a big gala tonight.”

Stars like Diplo, Sofia Carson, and DJ Cruz also performed before Lopez took the stage to headline the show. Some other celebs who were present at the event included Jamie Foxx, Vanessa Hudgens, Leonardo DiCaprio, Jared Leto, and Haim.

Lopez’s show came two weeks after her marriage to Affleck, who got married two decades after first breaking their engagement in 2004.

The actress announced her wedding news in an instalment of her ‘On The JLo’ newsletter earlier in July, and in a letter to her fans, Jennifer wrote, “We did it. Love is beautiful. Love is kind. And it turns out love is patient. Twenty years patient.”

Meanwhile, media outlet Page Six has reported that the ‘Marry Me’ star plans to throw a lavish and bigger wedding reception at Affleck’s Georgia property in the coming weeks, for which the couple have hired luxury event planner Colin Cowie to help them create a memorable bash, several unnamed sources told them. It is said that those who were not invited to the wedding will be gracing the party.