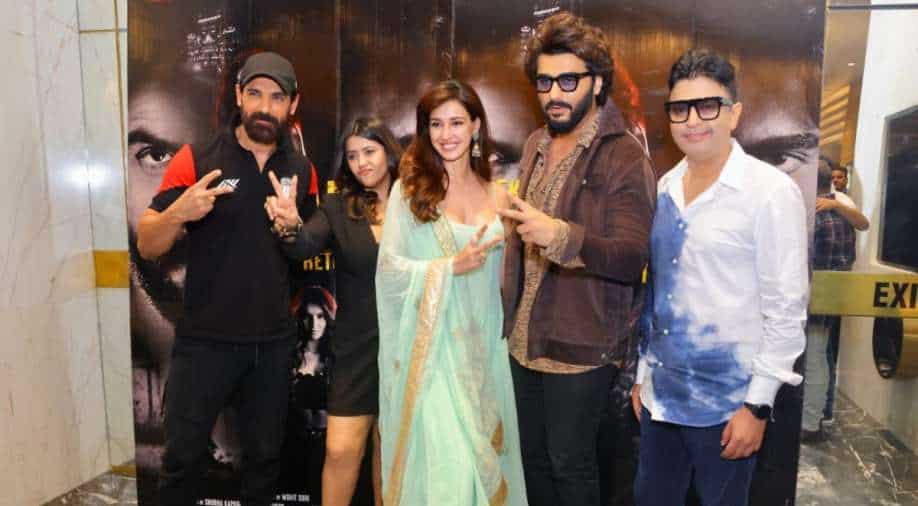 To promote their upcoming film ‘Ek Villain Returns’, actors John Abraham, Disha Patani and Arjun Kapoor joined producers Ekta Kapoor and Bhushan Kumar at Inox cinema hall in Delhi on Monday. While interacting with the media, they opened up about the Mohit Suri directorial and also spoke about several other trending topics.

While talking about their process of playing morally grey characters in the film, John Abraham said, “Even my character in my first film ‘Jism’ had grey shades, then ‘Zinda’, ‘New York’ was a different kind of grey for me, then ‘Taxi No. 9211’. So, I have done several such films. And, I think normal is boring. In this film, in particular, the characters have so many different shades. And, when I watched the film, I found it very interesting. And, I think the audience will enjoy it. Also, it’s not just about being a villain, it’s about their journey and how they faced problems that changed them or impacted them.”

Adding to the same, Arjun Kapoor shared, “I have played a grey character even in my first film ‘Ishaqzaade’ but ya, in this film, my character wants to be dark and his ideology is that he can die but not lose. And, he is okay being a villain in people’s lives. So, for me, it was the extreme version of grey and that’s taking things to a whole new level for me.”

At the press conference, Ekta Kapoor also slammed Youtuber Kamaal R. Khan for claiming that ‘Ek Villan Returns’ is a remake of a Korean film. She denied KRK’s claims and said that the movie is not a remake of any film and that she had to ask for the film’s script for Rohit Shetty because he was already thinking of making the film. However, at Ekta’s request, Rohit Shetty handed over the script to Ekta and Mohit Suri since it fits better with the ‘Ek Villan’ franchise. “I don’t know what Korean Mr KRK is watching. But he seems to know more than I know I do I think,” Kapoor said.

When asked about Ranveer Singh’s viral nude photoshoot, Arjun Kapoor said, “Ranveer Singh is a person who is known for his personality. He is someone who stays true to himself and never pretends to be someone else. If he is happy doing what he is doing and if it’s done aesthetically and if it is something that is coming from a genuine place to showcase how comfortable he is with his body. I think opinions are always fair like I always say. But it doesn’t mean it has to get into forcing your opinion down. He has every right to enjoy entertaining people in whichever way he seems right, we should not give it too much importance. We should look at the positive. If we start looking at the negativity, that’s what we will see. We should accept it as a part of his expression and move on.”

Answering the same question, John Abraham said, “I’ve also wanted to tell you that there are a lot of edited portions of ‘Dostana’ that have had nude scenes.”

The 49-year-old actor also commented on Akshay Kumar’s recent comments on finding it hard to convince actors for doing an ensemble or two lead actors film. “I have loved my association with Arjun, with Varun (Dhawan, in Dishoom), with Abhishek (Bachchan, in Dhoom). With Akshay I have done 3 films, I love him to death. And I think he’s probably right to an extent. But I think there are places where you can work with two, or three actors, maybe you can’t make an Oceans 11, you can make an ‘Oceans 3’ or ‘Oceans 4’, you know what I’m saying? So I think we can make things happen, and the new generation, the younger lot is more willing, I’m assuming. So I don’t see that as an issue,” John said.