Skip to content
HomeEntertainmentJohnny Depp gets support from Chris Rock in defamation case, ‘Believe all women… except Amber Heard’ 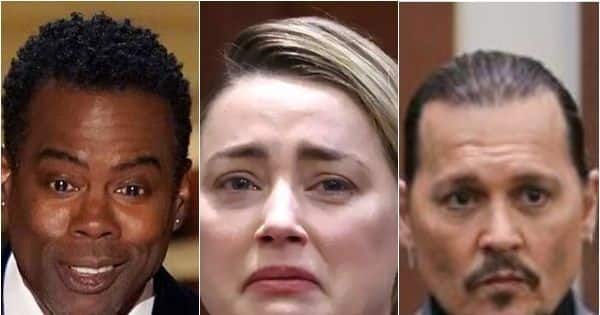 Johnny Depp and Amber Heard‘s ongoing defamation case has grabbed everyone’s attention because of the shocking revelations and encounters of domestic violence from both the sides. Depp is suing Heard for $50 million over an article in which she said she was a victim of abuse. She is countersuing for $100 million. Amid the ongoing trial, comedian Chris Rock has chosen to side with Johnny by taking a sly dig at Amber urging to believe all women except the actress. Also Read – Hollywood News weekly rewind: Johnny Depp’s love saga with attorney amidst case with Amber Heard, Britney Spears’ nude pic and more

As reported by LAD Bible, during his performance at his Ego Death tour in London, Chris alluded to Heard allegedly pooping on Depp’s bed and said, “Believe all women, believe all women… except Amber Heard… What the f**k is she on? She s**t in his bed! She’s fine but she’s not s******g fine. She s**t in his bed. Once you s**t in someone’s bed you just guilty of everything. She s**t in his bed. What the f**k is going on there? Wow. And they had a relationship after that. It must be amazing p***y… I’ve been with some crazy b*****s but goddammit.” The jibe landed pretty well as the crowd erupted in laughter. Also Read – Trending Hollywood News Today: BTS’ Jin returns to Instagram, Johnny Depp ‘Reenergising’ in the UK amidst trial against Amber Heard and more

A member of Depp’s security team had earlier testified at the court trial that the Hollywood actor’s ex wife Amber Heard admitted to pooping on Depp’s shared bed after an explosive fight, adding that she called it a ‘horrible practical joke,’ as reported by the Insider. Starling Jenkins, the member of Depp’s security team, has claimed that Heard took the responsibility for leaving her poop on Johnny’s side of their shared bed. He recalled the night of April 21, 2016, when this particular incident has taken place. Also Read – Trending Hollywood News Today: Amber Heard-Johnny Depp ‘putting on an act in court’; BTS’ Jungkook’s Stay Alive achieves new milestone and more

Earlier, Chris had taken a sly dig at his Oscars 2022 slapgate involving Will Smith after comedian Dave Chappelle was attacked on stage while performing a comedy set during the streaming giant’s Netflix Is a Joke festival in Los Angeles. Chris joined Dave on stage to check if he’s alright and quipped, “Was that Will Smith?”, which was followed by a loud cheer and applause from the audience.