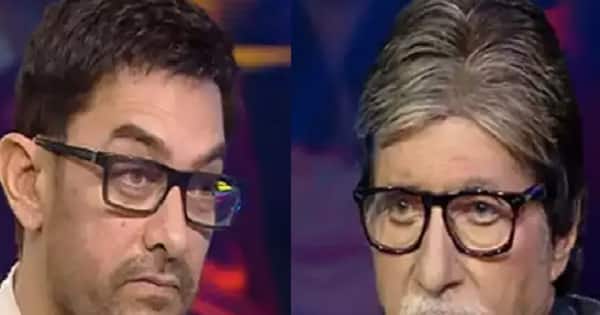 Amitabh Bachchan is known to take funny digs at the contestants of his show Kaun Banega Crorepati as that helps him break the ice with them. And the latest one who is on the radar of the megastar of Bollywood is Aamir Khan. The Laal Singh Chadha actor made an appearance on KBC 14 to participate in the celebration of Independence Day and in the video we see Big B expressing being upset with the superstar for not promoting his quiz show over the years. Aamir and Amitabh’s this banter is unmissable and it will definitely tickle your funny bones. The camaraderie grabbed all the eyeballs of the audience on the show. Also Read – Laal Singh Chaddha: Kareena Kapoor Khan receives major flak over her remarks on ‘cancel culture’; netizens troll her over her ‘ahankar’

Amitabh Bachchan leaves Aamir Khan embarrassed Also Read – Samantha Ruth Prabhu is NOT happy with the constant conversation around her past with ex husband Naga Chaitanya?

Aamir Khan in the video can be seen explaining that he never uses social media and even if he has, he has done it to promote his friend’s films and shows from the industry. To which immediately the megastar takes a funny dig at the actor asking why hasn’t he yet promoted his show till date. A tad bit embarrassed Aamir folds his hands and says that his show doesn’t need to be promoted as it’s already a massive hit. And the audience present there couldn’t agree more with the actor. Also Read – Trending Entertainment News Today: Aamir Khan, Kareena Kapoor Khan react on ‘Boycott Laal Singh Chaddha’ trend; Mallika Sherawat exposes Bollywood and more

Aamir Khan and Amitabh Bachchan share a great bond over the years now. The stars worked together in Thugs Of Hindostan which didn’t manage to impress the audience but they had a great time and a lifetime memory. Seeing their chemistry their fans are once again demanding to see them together and all we can hope is that happens soon. Right now Aamir is awaiting the release of Laal Singh Chaddha along with Kareena Kapoor Khan.