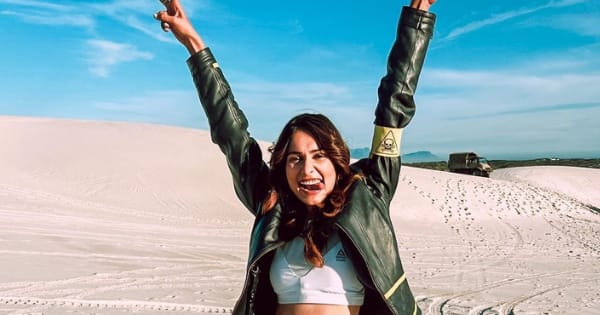 Aneri Vajani who is currently being seen in Khatron Ke Khiladi 12 is one of the popular names in the industry. She was previously seen in Rupali Ganguly, Gaurav Khanna and Sudhanshu Pandey starrer Anupamaa. Aneri Vajani has worked in some of the most popular TV shows and has delivered great content, entertaining the masses. However, Aneri has been subjected to brutal trolling online due to her slim fit. Aneri has slammed the body-shamers in her latest conversation with an entertainment portal. Also Read – Khatron Ke Khiladi 12: From Aneri Vajani to Shivangi Joshi — THESE 8 TV stars fail to make it to top 5; get eliminated before the finale

Aneri is unfazed by the brutal trolling online and instead, she often slams them saying that the grapes are sour and they should look at themselves. Aneri Vajani said that everyone is different and has different body types. The Silsila Badalte Rishton Ka 2 actress said that she has tried very hard and has worked very hard to let her work speak and not her body. The actress believes that mocking someone for eating too much is as bad as telling someone that he/she is too thin or asking them to eat up. Also Read – Khatron Ke Khiladi 12: Aneri Vajani says people will regret underestimating her; compares herself to Allu Arjun’s Pushpa, ‘Flower nahi, fire hai’

Aneri feels blessed to have such a body type

The Anupamaa actress said that she has been blessed with such a good body and credited it to genes. Aneri said that she doesn’t have to work very hard to maintain her body. The actress added that been blessed with a body for which she doesn’t have to slog in the gym for hours to lose weight. And even if she wants to gain weight, it’s not an issue for her. Aneri adds, ” Being slim and being unfit are two different things. I am slim but I am not unfit.” Aneri Vajani elaborated that if she has been asked to gain weight and she isn’t able to, then it would be a problem for her. However, she has never encountered such a situation. Aneri gave an example saying that she has a very girl-next-door kinda vibe and people like that aspect about her. She believes there’s a certain rawness to her that she would like to stay with her forever. “Not everyone is blessed with a good body in the world,” she said. Also Read – Khatron Ke Khiladi 12: Fans are rooting for THIS TV beauty among other strong contenders to win Rohit Shetty’s show [View Poll Result]