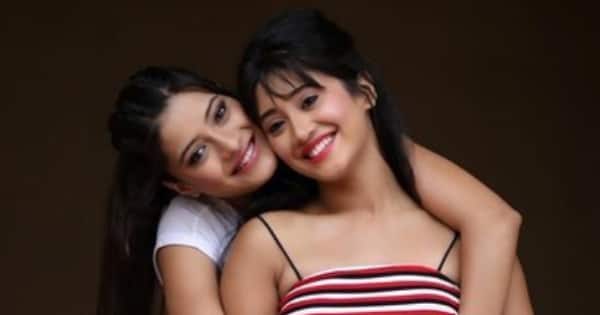 Shivangi Joshi is one of the most loved actresses in the country. She is currently seen in Rohit Shetty‘s stunt-based reality TV show, Khatron Ke Khiladi 12. Shivangi recently sat down for a fun segment on her sister, Sheetal Joshi‘s Youtube channel. Sheetal conducted a 20 questions session with Shivangi Joshi and she went on to ask a lot of things to her sister. Their sibling bond is quite evident and relatable. Shivangi Joshi is just the cutest. One of the questions Sheetal asked her sister was how many kids she wants to have… Also Read – Khatron Ke Khiladi 12: After Shivangi Joshi, THIS contestant eliminated; Rubina Dilaik breaks down after fight with Mohit Malik

Shivangi reveal the number of kids she wants to have

Shivangi Joshi was the guest on Sheetal Joshi’s show on her YouTube Channel. The two sisters twinned in floral outfits and were cuteness overload. From her crush to one thing she didn’t tell her sister to the number of kids Shivangi wants to have, the Yeh Rishta Kya Kehlata Hai actress answered the majority of the questions. When asked about the number of kids she wants to have, the Khatron Ke Khiladi 12 star revealed that she wants to have 12 kids. Sheetal teased her saying would she be making her own cricket team of 11 players. Shivangi played along and said yes. She quickly added 2 later on. Well, Shivangi Joshi’s this statement is surely going to create a stir in entertainment news. Also Read – Hina Khan-Shaheer Sheikh, Shivangi Joshi-Tahir Raj Bhasin and more ‘best surprise jodis’ of TV stars in music videos [View Pics]

Shivangi Joshi’s crush and bond with her siblings

Throughout the video, we saw Shivangi and Sheetal teasing each other. Shivangi revealed that Sheetal has a saying that goes, “Jo tera hai wo mera hai aur jo mera hai wo bhi mera hai,” while discussing how Sheetal loves to steal clothes from her wardrobe. However, when Sheetal quizzed Shivangi Joshi on which of the two is her favourite sibling, the gorgeous Balika Vadhu 2 beauty named both. Despite being pressured, Shivangi maintained the same answer. Awe, such a doting elder sister she is, right? Sheetal also asked Shivangi about her crush. Also Read – Harshad Chopda-Pranali Rathod, Shivangi Joshi-Mohsin Khan and more TV jodis with sizzling hot chemistry that fans want to see date for real

Shivangi Joshi doesn’t remember having a crush on Hrithik Roshan

Well, she does remember she used to love Hrithik but not the story behind it. So, her family revealed the whole story of Shivangi Joshi’s crush on Hrithik Roshan. And it goes like Shivangi would sleep with Hrithik’s photo under her pillow. That’s not it, she would love one ad which featured Hrithik. It was a soft drink brand ad and back then one would get posters of Hrithik alongside the soft drink. Shivangi’s family members would get the posters only for her. Such a cute memory, no?