Skip to content
HomeEntertainmentLaal Singh Chaddha actor Naga Chaitanya opens up on nepotism in Telugu film industry; says, ‘Nothing wrong in it’ 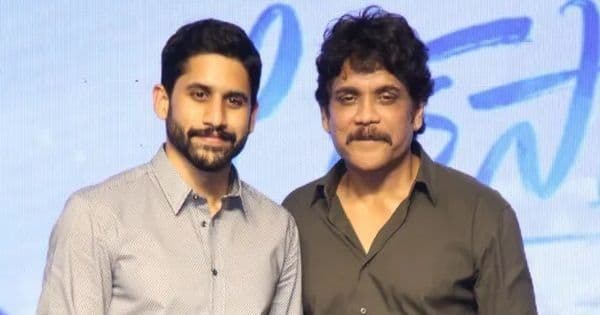 Naga Chaitanya is all set to make his big Bollywood debut with Aamir Khan starrer Laal Singh Chaddha. In his new interview with DNA, Chaitanya opened up about nepotism in the Telugu film industry as most of the actors and superstars come from a filmy background. He said that there’s nothing wrong in a family trying to take its legacy forward. Also Read – Accusing Aamir Khan for ‘boycott Laal Singh Chaddha’ to taking a dig at Shah Rukh during Aryan drug case; 5 times Kangana Ranaut picked on B-town superstars

Naga Chaitanya is the son of Telugu superstar Nagarjuna. His paternal grandfather, actor Akkineni Nageswara Rao and his maternal grandfather, producer D Ramanaidu are one of the most prominent figures in Telugu cinema. He has a paternal half-brother, actor Akhil Akkineni. His maternal uncle is superstar Venkatesh and first cousins and actors Rana Daggubati, Sumanth and Sushanth. Also Read – Laal Singh Chaddha: No ‘adult scenes’ in Aamir Khan-Kareena Kapoor Khan starrer; actor REVEALS the reason behind it [Read Deets]

Speaking about nepotism in Telugu cinema, Chaitanya told the leading daily, “What’s wrong (coming from a film family). My grandad was an actor, my dad got inspired by him and became and actor. I saw these two amazing actors and I got inspired by them and wanted to take that forward. I feel there’s nothing wrong in that. It’s just a beautiful journey that we are trying to continue.” Also Read – Kangana Ranaut CLAIMS mastermind Aamir Khan started the boycott Laal Singh Chaddha trend; says ‘Hollywood remake would have not worked anyway’

“There’s so much of learning that they can pass on from generation to generation. End of the day, we are all here to contribute to the society and to entertain people in some way or the other. That’s the final goal. There’s no right or wrong to anything, it’s an opinion at the end of the day,” he added.

Chaitanya admitted to having an easy start in the Telugu film industry compared to outsiders. However, he claimed that everybody gets a fair chance to prove themselves and if someone makes a mistake, they are out of the game.

On Koffee With Karan 7, Arjun Reddy fame Vijay Deverakonda, who is also making his big Bollywood debut with Liger, shared if he ever alienated being an outsider in the Telugu industry. “It’s definitely not easy breaking in when you are a stark outsider with absolutely no access to the industry at all. It makes it much harder to be alienated.”

He added, “I don’t know if I would say that. Basically, my thoughts on this are that the worlds are not fair. We are not all born with the same financial status, we are not born with the same height, with the same looks, or with the same physical abilities and I had never blamed someone or disliked someone for being born to a rich father may be where I was struggling to pay rent, to someone born in the industry. It’s not her fault or any star kid’s fault that they are born to a parent who are acting.”