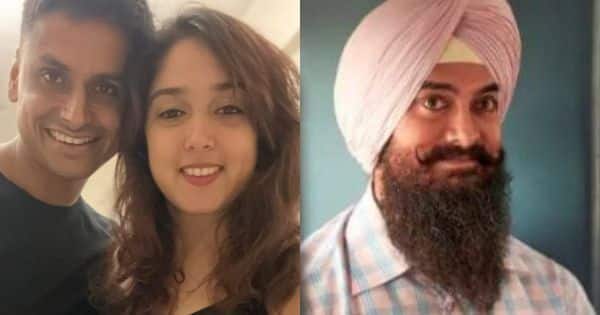 Laal Singh Chaddha is based on 1994 multiple Oscar-winning Hollywood classic, Forrest Gump, which traces the evolution of Tom Hanks‘ eponymous character through the annals of American history. Laal Singh Chaddha is expected to take a similar path and the trailer of the Aamir Khan and Kareena Kapoor starrer, which dropped between the IPL 2022 final, signifies just that, with a young Aamir Khan suffering a walking impediment plus mental challenges, only to overcome the former and undertake a life-changing, cross-country marathon. Also Read – Trending Entertainment News Today: Laal Singh Chaddha-Raksha Bandhan BO war, Vijay Deverakonda FORCED to leave Liger event, Shah Rukh Khan annoyed and more

Ira Khan and her boyfriend, Nupur Shikhare, decided to come out in strong support of the former’s father, Aamir Khan’s upcoming big release, Laal Singh Chaddha, especially among the growing and frankly, ludicrous ‘boycott’ outcry against the movie. The two lovebirds twinned in black as Ira Khan posted a loved-up picture with boyfriend Nupur Shikhare on her official Instagram handle while giving a shoutout to her father’s, Laal Singh Chaddha. Check out her Insta post below: Also Read – Kaun Banega Crorepati 14: Netizens UPSET with Aamir Khan being a guest amidst ‘Boycott Laal Singh Chaddha’ row; call Amitabh Bachchan’s show ‘SCRIPTED’

Aamir Khan didn’t like the idea of remaking Forrest Gump

Opening up on initially not like the idea of remaking Forrest Gump, Aamir Khan told website Cinestaan that he was first and foremost a little worried when Atul Kulkarni had written the script as he hadn’t penned one before and he also felt that a cult classic like Forrest Gump is very difficult to imagine to adapt into another film, which is why he didn’t listen to Atul script for 2 entire years, but finally conceded as the later kept pursuing him. Aamir added that he even questioned Atul over how he dared to think to make him read a script on Forrest Gump and how could he ever imagine remaking Forrest Gump, which would be akin to making Mughal-a-Azam and Mother India again. Also Read – Laal Singh Chaddha: Aamir Khan felt adapting Forrest Gump was like remaking Mughal-a-Azam and Mother India; asked Atul Kulkarni, ‘How DARE you?’