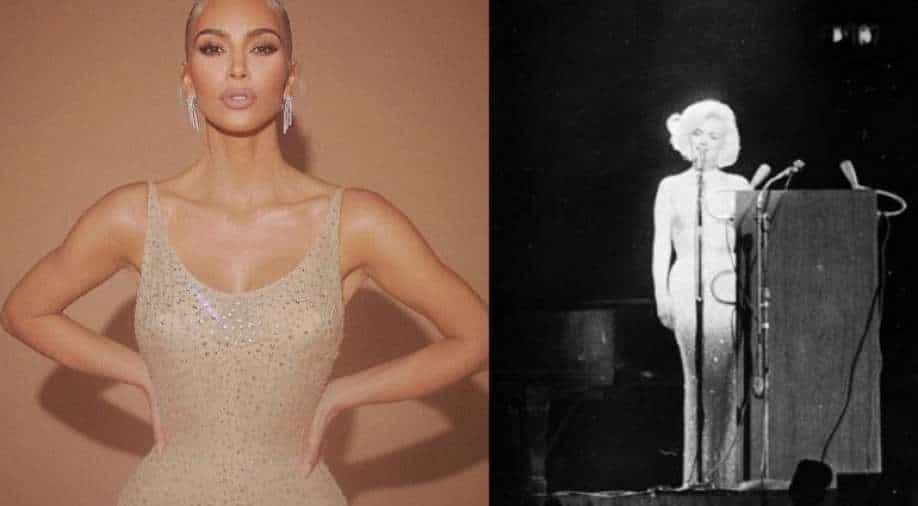 Like every year, Met Gala saw a unique set of fashion looks as the celebrities from around the world gathered for the annual charity gala. But this year, the dress that made most of the headline is Kim Kardashian’s golden gown.

As we were aware that this year’s theme was all about bringing the vintage fashion to the red carpet, so sticking to that Kim Kardashian again took the fashion game a notch higher.

On Monday’s event, the mom-of-four hit the red carpet in the golden skin-tight dress and dyed her hair in blonde hair and made a neat high bun – totally breathtaking. but, what shocked everyone when everyone come to know the dress she flaunting on the red carpet of legendary artist Marilyn Monroe.

Six decades ago, Monroe wore the dress at another iconic event that was of formar President John F. Kennedy’s birthday.

Wearing a glittery dress, at a 45th birthday celebration of President Kennedy in the year 1963 the Moroe famously sang the “Happy birthday” for the former president.

The naked dress which is adorned with more than 6,000 hand-sewn crystals by costumier Jean Louis is also one of the world’s most expensive dresses. Monroe reportedly bought the dress for $1400, which was later auctioned years after her death.

A few hours after she made head turns on the red carpet, Kim shared a series of her photos wearing the iconic dress along with a black and white photo of Marilyn wearing the same dress.

In the caption, the media mogul paid a small tribute to the dress and thanked Ripley’s Believe It or Not museum for letting her wear the dress.

”Met Gala — In America: An Anthology of Fashion. I am so honoured to be wearing the iconic dress that Marilyn Monroe wore in 1962 to sing “Happy Birthday” to President John F. Kennedy. It is a stunning skintight gown adorned with more than 6,000 hand-sewn crystals by costumier Jean Louis.”

”Thank you Ripley’s Believe It or Not! for giving me the opportunity to debut this evocative piece of fashion history for the first time since the late Marilyn Monroe wore it. I am forever grateful for this moment. ✨🕊”

For the unversed, in the year 2016, the museum purchased the dress for a whopping amount of $4.8 million (approx Rs 35 crore). Since then, the dress has been kept at a museum in Orlando, Florida.

During the interview with Vogue, Kim shared that the idea came after the September Met gala event, last year. ”I thought to myself, what would I have done for the American theme if it had not been the Balenciaga look? What’s the most American thing you can think of? And that’s Marilyn
Monroe,” she said.

Kardashian made history by becoming the only person to wear the dress after Marilyn. ”’This is Marilyn Monroe’s dress. It’s sixty years old. I had this idea to put it on and try it on. They came with armed guards and gloves. I tried it on and it didn’t fit me. I had to lose 16 pounds,’ she said on the red carpet, as per the Daily Mail

‘I was determined to fit it… I did it…’ Kim said before revealing that she hadn’t eaten any carbs and sugar for three months.