Months after her sexually explicit MMS video got leaked online, Bhojpuri playback singer Shilpi Raj is once again hitting the headlines for her shocking cryptic Facebook post where she talked about giving up on life. She wrote in her post that she doesn’t feel like living in the world anymore and asked for forgiveness. Also Read – Before Shilpi Raj MMS leak, private moments of Jacqueline Fernandez, Kangana Ranaut, Nayanthara and more went viral online

“I could not do well in anything (1) neither studies (2) nor music… what I was and what I have become now, to tell the truth, today I have become a puppet, I don’t understant what to do (mother)…Only you were the one who stopped me…but now… I feel like living in this world, please forgive!” read Shilpi Raj’s now-deleted Facebook post, loosely translated from Hindi. 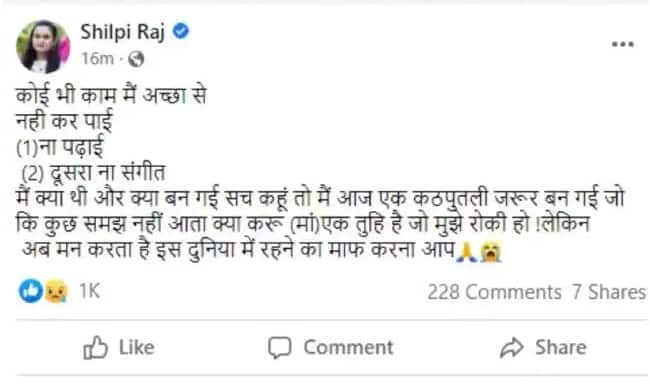 Her post raised eyebrows and fans showed concern about the singer’s current state of mind and what she was up to. While many people thought that Shilpi was going to take extreme step to take her own life, she clarified that she penned down her thoughts under pressure. “I had no intention of committing suicide. I wrote this post under the pressure of work. At the moment I am absolutely fine,” she was quoted as saying by News18.

In April, Shilpi’s MMS video has caused a massive stir on the internet. The singer was seen indulging in sexual activities with her alleged boyfriend Vijay Chauhan. As soon as her video went viral on social media platforms, a teary-eyed Shilpi made an appeal to fans in a live video requesting them to stop sharing her video online.