Skip to content
HomeEntertainmentOTT release dates of ‘House of Dragons’, ‘She-Hulk: Attorney at Law’ and ‘Thor: Love and Thunder’ 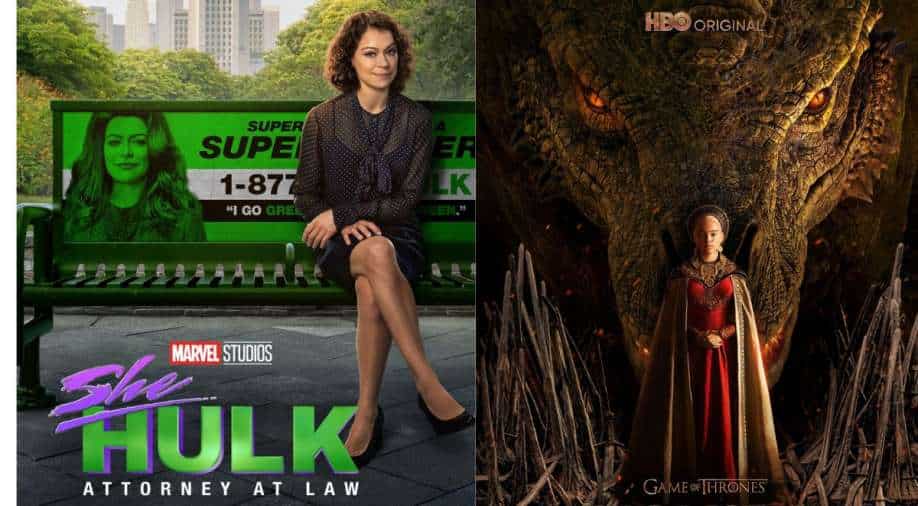 It’s time to binge-watch new Hollywood movies on OTT services like Netflix, Amazon Prime Video, Disney + Hotstar, Voot Select, Zee5, and others. The new week features a lot of exciting film lineups. Movies like ‘House of Dragons’, ‘She-Hulk: Attorney at Law’, and ‘Thor: Love and Thunder’ are all set to release this week on OTT Platforms.

Check out what’s new on OTT this weekend, and then grab some popcorn to binge-watch!

House of Dragons: Where to watch this movie online

The House of Dragons will take place 200 years before the events of Game of Thrones and will focus on the Targaryen family’s demise. The series will ultimately depict the events leading to the “Dance of the Dragons,” based on George R.R. Martin’s novel Fire and Blood. In House of Dragons, Paddy Considine portrays King Viserys, and Emma D’Arcy will join him as Princess Rhaenyra and Matt Smith as Daemon Targaryen. Olivia Cooke (Lady Alicent Hightower), Steve Toussaint (Lord Corlys Velaryon), Eve Best (Princess Rhaenys Velaryon), and Rhys Ifans will also be seen in the film (Ser Otto Hightower).

House of the Dragons will begin streaming on August 22, 2022, with the first episode airing on Disney+ Hotstar in India and HBO Max in other areas.

She-Hulk: Attorney at Law: Where to watch this movie online

The Marvel Cinematic Universe is now seeing an inflow of new characters geared to further the universe’s plot. Jennifer Walters, played by Tatiana Maslany in She-Hulk: Attorney at Law, is one of the most crucial figures in the future scheme of things. The program, which marks Maslany’s MCU debut, is set to premiere this Wednesday. While there are many exciting and humorous things in store for us, the performance might have marked the return of Spider-Man, aka Tom Holland.

She-Hulk: Attorney at Law will launch on Disney+ Hotstar in India on August 17.

Thor: Love and Thunder: Where to watch this movie online

Thor (Chris Hemsworth) is on a journey for inner peace beyond anything he’s ever known. However, Gorr the God Butcher (Christian Bale), a cosmic killer who desires the death of the gods, disturbs his retirement. To combat the threat, Thor enlists the help of King Valkyrie (Tessa Thompson), Korg (Taika Waititi), and ex-girlfriend Jane Foster (Natalie Portman), who wields Thor’s legendary hammer, Mjolnir, as the Mighty Thor, much to Thor’s surprise. They embark on a risky cosmic adventure together in order to discover the truth behind the God Butcher’s vengeance and stop him before it’s too late.

In India, the film is slated to be available on the OTT behemoth Disney+ Hotstar before the end of the current month of August 2022. The producers have not yet announced the official release date.