Finally, the day has arrived when Kangana Ranaut will never say that she doesn’t have anyone in the industry who supports her. She finally gets the support of the biggest star in Bollywood and he is none other than Salman Khan. Many were surprised to see Kangana attending Salman Khan’s Eid party at sister Arpita Khan Sharma’s house and now Salman has openly supported Kangana’s film Dhaakad. Yes. He took to his Twitter and stood out in support of Kangana’s Dhaakad and wished her all the love and luck, “Wishing team #Dhaakad the very best #KanganaRanaut @rampalarjun #SohelMaklai”. Also Read – Sarkaru Vaari Paata US box office day one: Mahesh Babu’s film off to a flying start; collects THIS amount

While Kangana couldn’t contain her excitement and she reacted the same by sharing his parse screenshots on her Instagram stories and wrote, “Thank you my Dabangg hero. Heart of gold. I will never ay again that I am alone in this industry. Thankyou from entire Dhaakad team”. Also Read – Dhaakad trailer: After Salman Khan, Ram Gopal Varma reviews Kangana Ranaut’s performance; compares her to Hrithik Roshan and Tiger Shroff 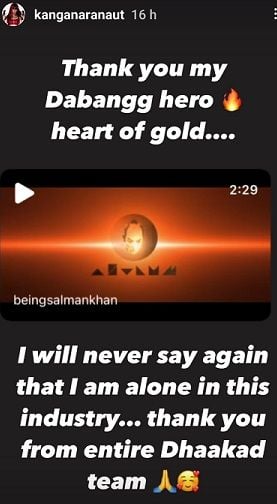 Also Read – Lock Upp winner Munawar Faruqui talks about meeting his son; says ‘Want to be there for him always’

Just a few days ago Kangana who had attended Salman Khan’s Eid party in an interaction mentioned how Bollywood actors are insecure about her and do not want to praise her in open despite everyone praising her personally at the party right from Kiara Advani to others. “These people don’t want to praise me. Sometimes, I feel there is no lobby but people have a lot of their insecurities. The other day, Kiara met and she praised me. She said to watch both the films (Dhaakad and Bhool Bhulaiyaa 2) and this and that. I don’t think there is pressure. I always say everyone is a feminist till they actually see a woman rise. Phir thoda sa hurt hota hai (It hurts a bit). I went to a Bollywood party (Arpita Khan’s Eid bash). Every person in the party was only talking about the trailer. When you are so impressed by a trailer–all of you–why is it so hidden then?”.

Well, we hope that now it’s a new start of Kangana with Bollywood and she will let the bygones be bygones.