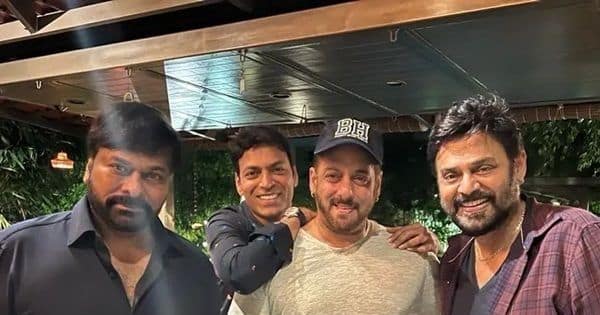 Salman Khan is currently busy shooting for his upcoming film Kabhi Eid Kabhi Diwali in Hyderabad. While the superstar is being greeted by many south superstars, the Dabangg Khan recently partied with Chiranjeevi and Venkatesh Daggubati at yet another private gathering. Also Read – Vicky Kaushal reveals how his friends REACTED when they learnt he is getting married to Katrina Kaif

The trio of Salman, Chiranjeevi and Venkatesh was spotted at their dear friend JC Pawan Reddy’s residence, as they were all gathered for a private party. A picture featuring them along with JC Pawan Reddy has been doing rounds on social media as all of them are seen having a great time. For the uninitiated, Salman will make a cameo appearance in Chiranjeevi’s upcoming film Godfather while Venkatesh will have a small but significant role in Kabhi Eid Kabhi Diwali. Also Read – Sona Mohapatra hits out again at Salman Khan; says, ‘I got rape, death threats and sh*t delivered in dabbas’

A few days ago, Salman was seen at the success bash of Kamal Haasan starrer Vikram, which has now grossed Rs 400 crore worldwide. The dinner was hosted by Chiranjeevi at his Hyderabad residence. The trio were pictured together. Also Read – Not just Brahmastra, Deepika Padukone to also have a cameo in Shah Rukh Khan and Nayanthara’s Jawan?

It was recently reported that RRR fame Ram Charan, who is currently working for his next with director Shankar Shanmugham, is going to make a cameo appearance for a special number in Salman’s Kabhi Eid Kabhi Diwali. The idea of having Ram on board for a special cameo in the song came from the team. And Ram apparently agreed to be a part of the song right away. The song is supposed to be a thrilling number, which will be the main attraction which will showcase Ram and Salman’s chemistry and their signature moves.