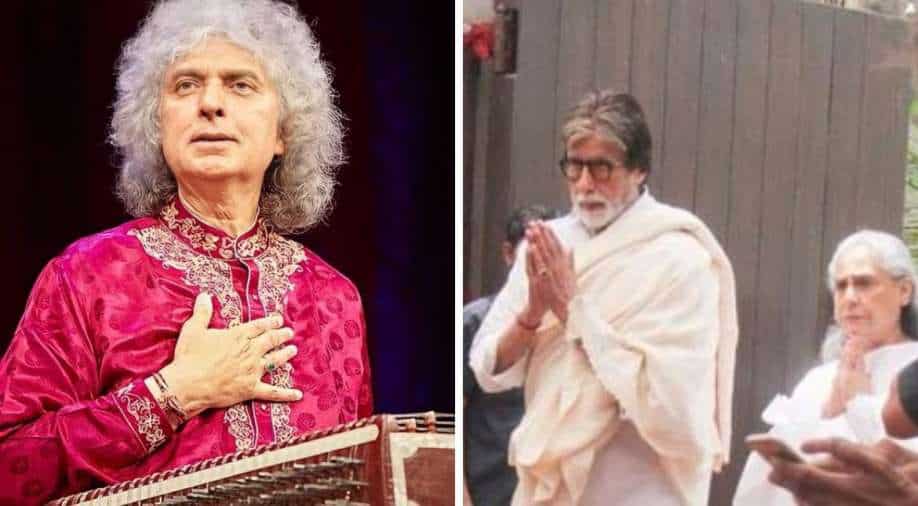 Music legend Pandit Shivkumar Sharma was cremated with full state honours in Mumbai on Wednesday. The veteran musician died on Tuesday after suffering a cardiac arrest.

In one of the images, Big B is seen interacting with Shivkumar’s son Rahul Sharma, a well-known musician himself. Big B also penned an emotional note in memory of Shivkumar Sharma, who had composed music for the former’s 1981 film ‘Silsila’, on his blog.

“There is the passing away of the Maestro, ShivKumar Sharma, who played the santoor, a special instrument, from the valleys of Kashmir .. who designed so many film music for me and many others .. continued success after success , numbs you from the pain of pain .. as also the reverse .. Shivkumar ji , who played the `santoor` in its brilliance .. who put his heart and soul into whatever he took up .. humble despite his incredible presence .. and the talent of a genius,” Big B wrote.

“A sad ending to the master of the string instrument .. he and Hari Prasad Chaurasia ji , the renowned flutist were a dua for film music .. they came as strong as they could .. played recorded and left,” he grieved.

Pandit Shivkumar Sharma breathed his last on Tuesday at the age of 84. His funeral was held at Vile Parle`s Pawan Hans Crematorium.Tabla maestro Zakir Hussain was also present at the funeral.