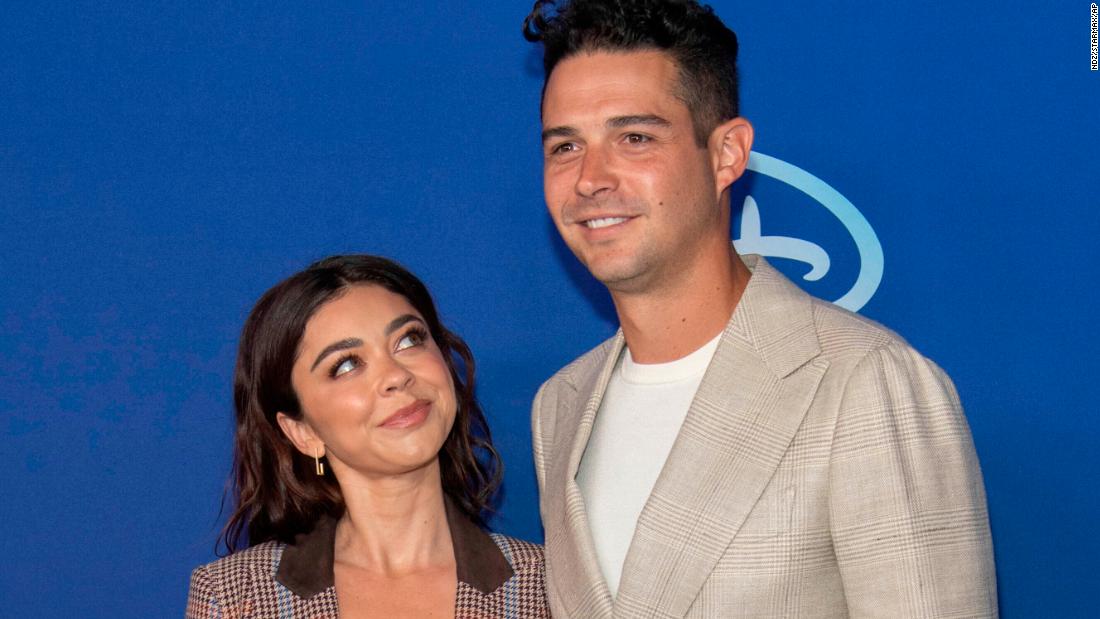 The 31-year-old actress was flanked by her on-screen family, including Sofia Vergara, Jesse Tyler Ferguson, Ariel Winter and Nolan Gould, as she said “I do” to the “Bachelor in Paradise” star.
According to E! News, the couple were married in an outdoor ceremony at Sunstone Winery near Santa Barbara, California.
While Hyland, who played Haley Dunphy on the hit ABC sitcom, has yet to share pictures from her wedding, Vergara, who brought her son Manolo as her plus-one, made sure to share snippets of the couple’s big day with her 26.5 million Instagram followers.
In one post, Vergara, who wore a black and white floral dress, shared a photo booth picture that featured Ferguson, his husband Justin Mikita and Gould, captioned: “#sarahandwells wedding,” followed by a series of heart emojis.
Ferguson also posted a snap of himself and Mikita, suited and booted for the big event, with the caption “Dads night out ❤️.”
Hyland and Adams started dating in 2017 after meeting on social media, and he popped the question in July 2019 in a romantic proposal on the beach.
Although the couple were originally meant to walk down the aisle in 2020, their nuptials were postponed multiple times due to the coronavirus pandemic.
Back in July, Hyland revealed that she might not go down the traditional route of taking her husband’s last name.
“My mom didn’t take my father’s last name, so that’s never been a thing for me,” she told E! News. “I do like being called ‘Mrs. Adams’ when we’re on vacation and stuff, and if the reservation’s under his name, I’m like, ‘Oh my god, I’m so cute.’ But I don’t know. Haven’t decided on it.”
“Modern Family” wrapped in 2020 after 11 years and 22 Emmy awards. Hyland is currently presenting the US version of “Love Island.”