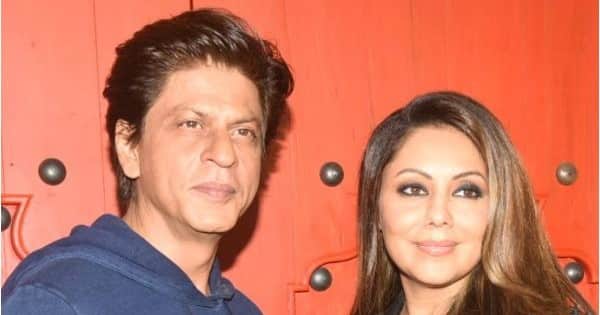 Shah Rukh Khan and Gauri Khan are one of the most loved couples in Bollywood. From social media to public appearances, they have always given their fans couple goals. Recently, SRK attended an event in Delhi, and the superstar looked dapper in the black suit. The pictures and the videos from the vent have gone viral, and his fans are going gaga over the classy look of the superstar. At the event, SRK said that he is not allowed to disrupt the design of the house and also revealed one of the few things that his wife Gauri allows him to do in Mannat. Also Read – MaAn wedding in Anupamaa unable to topple TMKOC; Naagin 6 continues to struggle – Check Top 10 TV Shows by Ormax Media

SRK said at the event, “In my house, most of the stuff that is bought for the house is obviously bought by the lady of the house, my wife Gauri. You are not allowed to disrupt the design in the house, because she is a wonderful designer herself. But one of the few things that I’m allowed to do because there is this understanding that maybe I know technology the best in the house.” Also Read – Kabhi Eid Kabhi Diwali: Farhad Samji OPENS Up about Salman Khan starrer; says, ‘Toofan ke pehele khamoshi hoti hai’

“Plus the aesthetics are so amazing, that nobody questions whenever I go and buy television, and put it in any room that I want or any place I wish to and this is God’s honest truth,” he added. Also Read – Trending celeb pics of the day: Suhana Khan’s orange dress grabs eyeballs; Nysa Devgn’s unseen glam avatar goes viral and more

Talking about Shah Rukh Khan’s movies, the actor will be seen in films like Pathaan, Dunki, and Atlee’s next. Pathaan, which also stars Deepika Padukone and John Abraham, is slated to release n January 2023. Dunki will hit the big screens in December 2023 and it also stars Taapsee Pannu in the lead role. Meanwhile, Atlee’s next is yet to be officially announced, however, the actor has started shooting it. The movie will mark South’s Lady Superstar, Nayanthara’s Bollywood debut. Reportedly, it also stars Sanya Malhotra, Priyamani, and Sunil Grover.