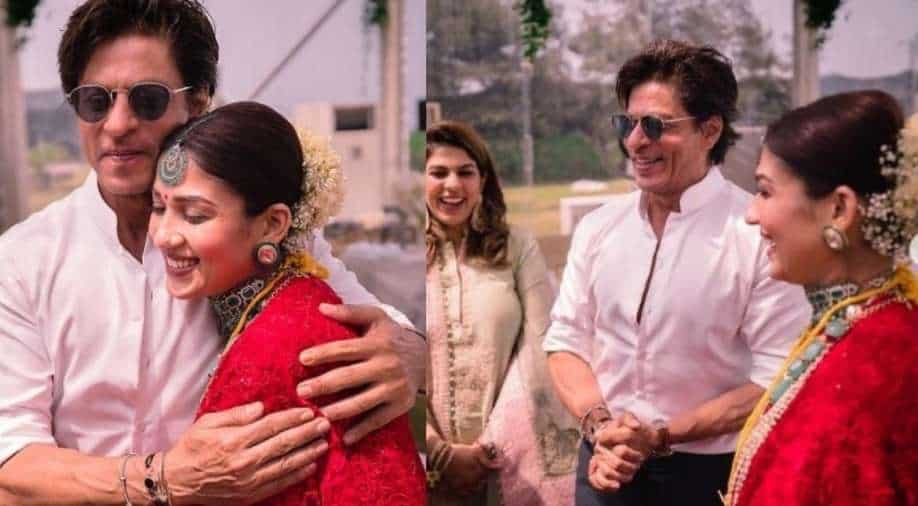 On Saturday, South Indian lady superstar Nayanthara’s director, Vignesh Shivan, took to social media and dropped a string of throwback pictures from his wedding day to mark their one-month anniversary. The couple got married on June 9 in Chennai, India. The throwback pictures show Nayanthara and Vignesh with the superstar Shah Rukh Khan and Rajnikant, who attended the couple’s wedding last month.

The ‘Paava Kadhaigal’ director captioned his Instagram post, “What more can anyone ask for ! #kingkhan @iamsrk ! Blessed to have this humble, kind, charming and wonderful human being with us during our wedding ! The Badshaah and the time with him ! Bliss ! Blessed One month anniversary”.

The lovely photos show Shah Rukh Khan giving a warm hug to his ‘Jawan’ co-star on her wedding day. For the day, SRK was looking handsome in a formal white shirt and black pants, while Nayanthara wore a beautiful red custom-made saree and Maang tikka.

In the second picture, which is a candid photograph, the ‘Don’ actor is seen sharing some happy moments with the newlywed couple with joined hands, while in the third picture, the newly married couple and Shah Rukh are joined by South director Atlee.

Atlee will be directing Shah Rukh and Nayanthara in the upcoming pan-India movie ‘Jawan’.

As soon as Vignesh shared the post, fans swamped the comment section with good wishes for the couple. “Happy one-month anniversary” a user commented followed by heart emoticons, another wrote, “so sweet together# SRK and Nayans”.

In another post, Vignesh shared photographs of Nayanthara and Rajnikanth holding hands and exchanging smiles, while in another picture, Rajnikanth is seen presenting gifts to the couple that also features filmmaker Mani Ratnam.

“With the loving #Thalaivar Rajnikanth sir 🙂 blessing our wedding with his esteemed presence with so much of positivity and goodwill. Happy to share some great moments on the one-month anniversary of our special day,” Vignesh captioned the post.

Nayanthara and Vignesh dated for a few years before tying the knot this June, which was held in Chennai in an intimate south Indian wedding ceremony. The couple recently returned from their honeymoon and have been treating their fans with beautiful pictures from their honeymoon.

Meanwhile, on the work front, Shah Rukh Khan has a number of films lined up.

Speaking of Rajinikanth, he will be next seen in ‘GodFather’ alongside South actor Chiranjeevi, which is set for release on the occasion of Dussehra 2022.