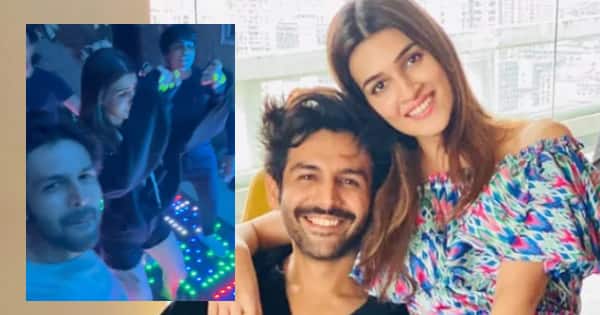 Kartik Aaryan and Kriti Sanon are currently busy shooting for Shehzada. The film is helmed by Rohit Dhawan and is reportedly a remake of Allu Arjun and Pooja Hegde starrer Ala Vaikunthapurramuloo. Recently, Kartik and Kriti along with the rest of the cast and crew members partied the night away after wrapping up the schedule of Shehzada. They were in such a groovy mood that you’d feel like joining them. Especially, Kartik Aaryan and Kriti Sanon. The two have become such buddies ever since starring together in Luka Chuppi. In the video that Kartik shared online, we see him, Kriti and Rohit alongside the other cast and crew members grooving to Akshay Kumar and John Abraham’s Desi Boyz song. Kartik Aaryan is making a lot of headlines in the entertainment news these days. Also Read – Koffee With Karan 7: Kartik Aaryan fans discuss Karan Johar’s fixation with the Shehzada star; say, ‘It’s Koffee With Kartik, he is running the show’ [Read Tweets]

Shehzada is being shot in Mumbai, Delhi and Mauritius, as per the reports. Apart from Kartik Aaryan and Kriti Sanon, the film also stars Paresh Rawal, Manisha Koirala, Ronit Roy and Sachin Khedekar. Shehzada is scheduled to release on 10th February 2023. Also Read – Koffee With Karan 7: Kartik Aaryan makes it to Karan Johar’s show after taking an indirect jibe at the filmmaker but here’s the twist