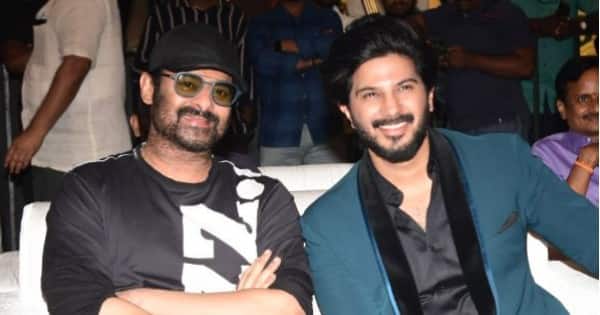 Sita Ramam starring Dulquer Salmaan, Mrunal Thakur, and Rashmika Mandanna is all set to release on 5th August 2022. The trailer and the songs of the film have impressed everyone as it’s looking like a beautiful love story. Even the makers are leaving no stone unturned to promote the movie. There have been multiple pre-release events for the film. Earlier, Vijay Deverakonda had attended an event for the film, and today Prabhas has graced a pre-release event. The pictures and the videos of the same have gone viral. Also Read – Bhaijaan: Salman Khan ropes in world’s smallest singer Abdu Rozik of Tajik fame for THIS special role

Prabhas has donned a t-shirt, jeans, and a cap, and his uber-cool avatar has impressed his fans a lot. Check out the pictures and videos below… Also Read – Animal: Rashmika Mandanna shares a picture of Ranbir Kapoor from the sets and it will make BTS’ ARMY super happy

Prabhas is someone who hardly gets spotted and his fans are always eagerly waiting to get a glimpse of his favourite star. The actor comes in front of media and fans mostly during the promotions of his own movies, so his presence at Sita Ramam’s pre-release event is surely a treat for his fans. Also Read – Kartik Aaryan, Shahid Kapoor and more Bollywood actors spotted with trendy sweatshirts today – who’s your pick for the coolest dude? [View Pics]

On the work front, Prabhas will be seen in movies like Project K, Adipurush, Salaar, Maruthi’s next, and Spirit. Adipurush is slated to release in January next year, and Salaar is also scheduled to hit the big screens in 2023. While the official release date of Project K is not yet announced, a few days ago, the makers confirmed that the film might release in October 2023 or early 2024.