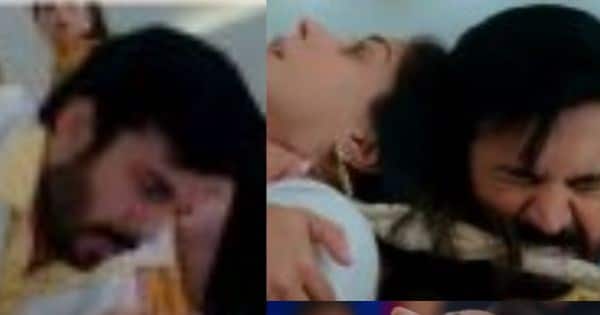 Recently, Sangita Ghosh’s peculiar scene from Swaran Ghar grabbed everyone’s attention. A scene from the show has gone viral on the internet and netizens are questioning the logic behind it. This video clip has become the most viral trend of the day. In the clip, Swarna (Sangita) throws her dupatta across her shoulders which accidentally gets stuck in between the fan in motion. She gets pulled with force and her neck gets choked as the dupatta gets tightens. Everyone runs towards her and tries to rescue her. Meanwhile, she continues getting choked and struggles for her life. Suddenly, Ajit (Ajay Chuadhary) bites the dupatta and tears it apart. He saves the life of Swarna and everyone praises him. Also Read – Swaran Ghar: Ronit Roy REVEALS the funny reason why he becomes emotional on the sets [Watch Exclusive Video]

The bizarre scene from Swarna Ghar has left netizens in a state of shock. They have been trying to figure out the logic used behind this scene and are questioning the science. This scene from the show has made way for hilarious memes and netizens have flooded the Twitter with jokes. One of the user on Twitter wrote, “I am dead laughing”, while other commented saying, “Kahan h re meri zahar ki pudiya”. Another wrote, “I want to leave Planet.” Also Read – Tejasswi Prakash-Simba Nagpal, Sangita Ghosh-Ronit Roy and more new TV jodis audience is excited to watch in 2022

Here’s how netizens reacted to the scene – Also Read – Rupali Ganguly, Shweta Tiwari, Urvashi Dholakia — Age is no bar for these actresses who command huge moolah for their shows

the actors in this are just TRUE professionals bcs i would just drop dead right there from laughing too much https://t.co/kqw6JWZcbF

What did i just watch? https://t.co/kbGHwXP5d1

There is a long list of bizarre scenes from the TV shows that have made netizens think about the logic. Earlier, Helly Shah’s suitcase scene became the talk of the town.