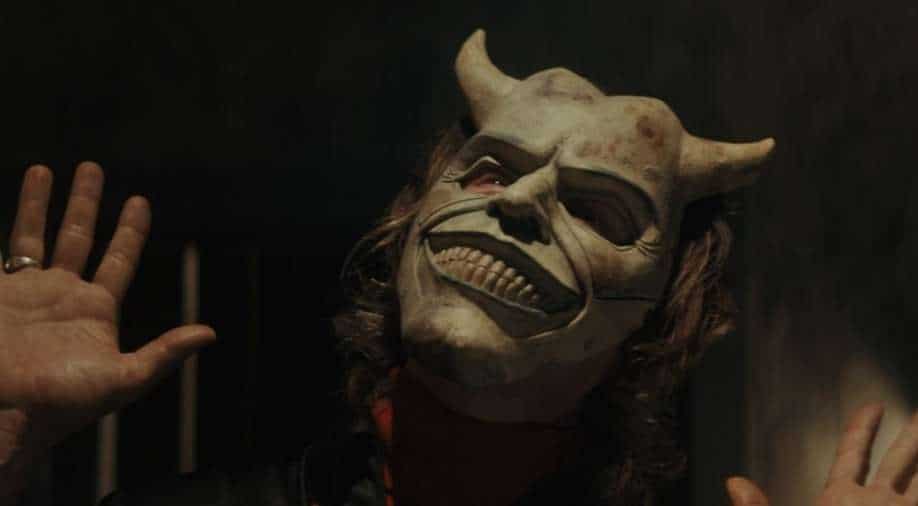 Finney Shaw (Mason Thames) and his younger sister Gwen (Madeleine McGraw) live in a small town in Colorado, US. They do not have a mother and have an alcoholic, violent man as a father. So for the most part have each other. Finney is your typical nice kid who gets bullied by classmates and does not fight back. Gwen, although tiny, is feisty and unafraid.

Gwen believes her dreams are not just dreams, but present glimpses of reality, something that also happened to her mother. Their town is rocked by a spate of kidnappings of children. Finney’s close friend and later Finney himself also ends up being grabbed by the mysterious man behind the abductions who is dubbed, rather unimaginatively, the ‘Grabber’. Now, it is up to him and his wits, and also his plucky sister and her dreams that can save him as law enforcement, as it often happens in these stories, has proven to be fairly ineffectual.

‘The Black Phone’, for half an hour or so, watches like another of those homages to 1980s and 1970s horror fiction that have little personality of their own, instead relying on the nostalgia factor. It is when Ethan Hawke’s ‘Grabber’ enters the picture the film really finds its feet.

Hawke, who by his own admission had loads of fun playing cult leader Arthur Harrow in the MCU TV series Moon Knight, turns in a magnificently eerie performance here. He has been a great actor for decades, but villainous roles may be where he really shines. The ‘Grabber’ is not your typical psychopath. He feels less a movie villain than something ripped off of Mindhunter, in that there is a sense of realism with him instilled by the writing and Hawke’s performance.

There are layers to him that the writing wisely leaves to the moviegoer to uncover. Similar to how Heath Ledger’s Joker was conceived and written by Christopher Nolan and his brother Jonathan Nolan in ‘The Dark Knight’, we do not really learn for sure what caused the ‘Grabber’ to become what he is — save for a few hints. Cargill and Derrickson realise, better than most writers, that the most potent fear is fear of the unknown. This is why we are afraid of the dark.

Not as nihilistic as Sinister, ‘The Black Phone’ is terrifying in its own ways. Most horror fans are admittedly not fond of jump scares, but Derrickson is an old hand here and executes them with a veteran’s ease. The atmosphere also helps infuse a sense of dread, assisted by impressive camerawork of the cinematographer. Apart from Hawke, both lead young actors, Thames and McGraw, also impress with their utter commitment to their respective roles.

‘The Black Phone’ excels in nearly every regard. Are you a horror or thriller fan? Do not miss this.