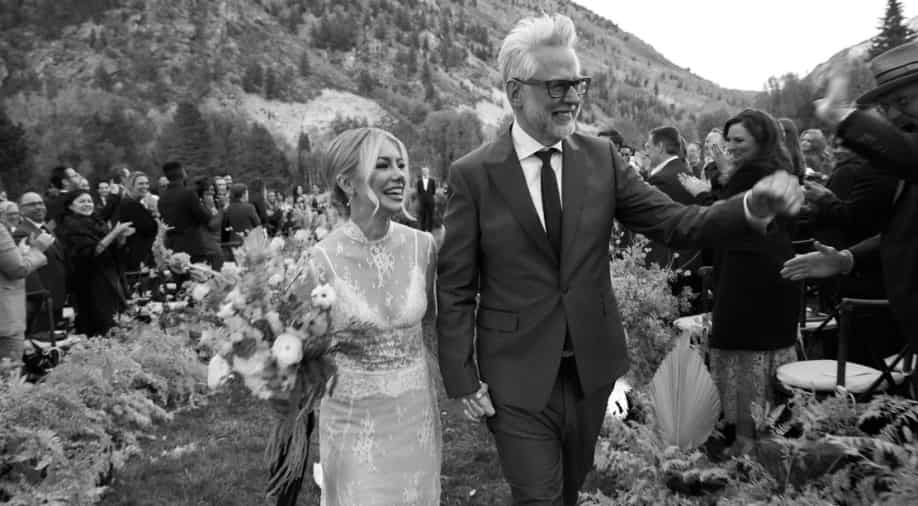 Hollywood director James Gunn, best known for ‘Guardians of the Galaxy’ and ‘The Suicide Squad’, married actress and his girlfriend of seven years Jennifer Holland over the last weekend. Gunn took to Twitter to share pictures from the wedding celebrations. Actors from the movies directed by him as well as ‘Peacemaker’, including his brother Sean Gunn, Chris Pratt, John Cena, Karen Gillan, Robert Patrick, Daniela Melchior, Freddie Stroma, David Dastmalchian, Nathan Fillion, Michael Rooker, among others. “This weekend I was lucky enough to marry my best friend & the love of my life, @jennlholland. ❤️” he wrote. He also shared a picture of multi-tier cake.

You can see the images below. This happiness in Gunn’s life comes after he faced a difficult time back in 2018 after a ban imposed by Disney from any projects of the studio, which was later reversed. The reason for the ban was his old tweets in which he appeared to joke about paedophilia and rape. The tweets resurfaced after US conservatives shared them due to his criticism of the Donald J Trump presidency.

Hours after the tweets appeared, Disney ended any association with him, including the ‘Guardians of the Galaxy’ franchise in the Marvel Cinematic Universe. This allowed Warner Bros to recruit him for a DC movie. He chose a soft reboot of 2016 movie ‘Suicide Squad’. The film, released last year, was critically acclaimed, though it suffered at the box office due to the same-day HBO release and pandemic-affected times. He also developed a spinoff series called ‘Peacemaker’ for DC at HBO Max.

Gunn has a unique style of direction that makes him different from his peers. He first rose to fame with his body horror films. His “heroes” are sort of losers at first who go on a path towards real heroism. His DC/Marvel comic-book movies, that have been team-ups so far, take the zaniness in the source material and craft a story about a bunch of people learning to fight together against a common enemy. Oh, and there is lots and lots of humour. ‘The Suicide Squad’ is arguably the funniest superhero film of 21st century, and it is not even a true comedy.