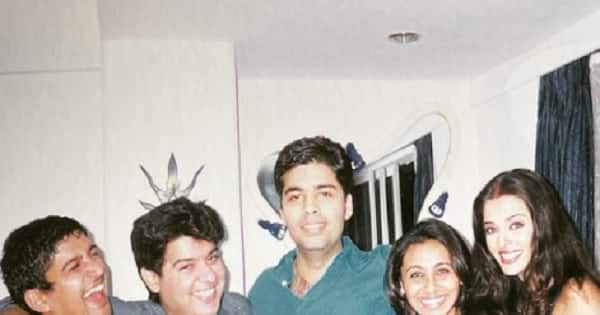 Aishwarya Rai Bachchan this old picture shared by Farah Khan from 2001 is going VIRAL for this reason. The actress is seen wearing a sindoor on a western outfit and fans are wondering why doe she has that sindoor n her forehead despite being unmarried. Aishwarya got married to Abhishek Bachchan in 2007 and this picture of Ash that is going VIRAL is from 2001. Also Read – Uttaran actress Tina Datta to make a comeback on TV? [Scoop]

Farah Khan who shared this thornback picture on her Instagram today and even revealed why Ash has sindoor on her forehead, ” #flashbackfriday .. housewarming 2001 at the first home I bought.. p.s- @aishwaryaraibachchan_arb had cm straight from devdas shoot thus the sindoor n rare pic of @karanjohar in non designer clothes @faroutakhtar @aslisajidkhan #ranimukherjee”. he went Farah Khan shared this picture it has been going VIRAL and fans are cherishing this old rare moment of their favourite stars. Also Read – Salman Khan comes out in support of Kangana Ranaut’s Dhaakad; actress reacts, ‘I will never say again that I am alone’

Farah has some gold pictures. The other day she had shared pictures which were the rarest of all having Shah Rukh Khan and Salman Khan dancing at Sanjay Kapoor and Maheep Kapoor’s sangeet ceremony. Fans couldn’t thank Farah enough to share these gold pictures and were insisting on her share these old pictures even more. Also Read – Before Katrina Kaif, pregnancy rumours of THESE B-town divas left everyone shell shocked

While Farah’s Instagram is indeed a fun to watch her fans love the way she keeps on roasting Karan Johar for his designer clothes and food. Yes! The filmmaker who accompanies Karan Johar on the set of Rocky Aur Rani Ki Prem Kahani as a choreographer had shared the video of Karan’s food and mentioned, ” Even his food is designer @karanjohar eats “moosh” as poor @azmishabana18 starves #Karah #flashback #wedontwanttoknow #rockyaurranikipremkahani”. Well, people loved how Shabana Ji was just adorable in this video.