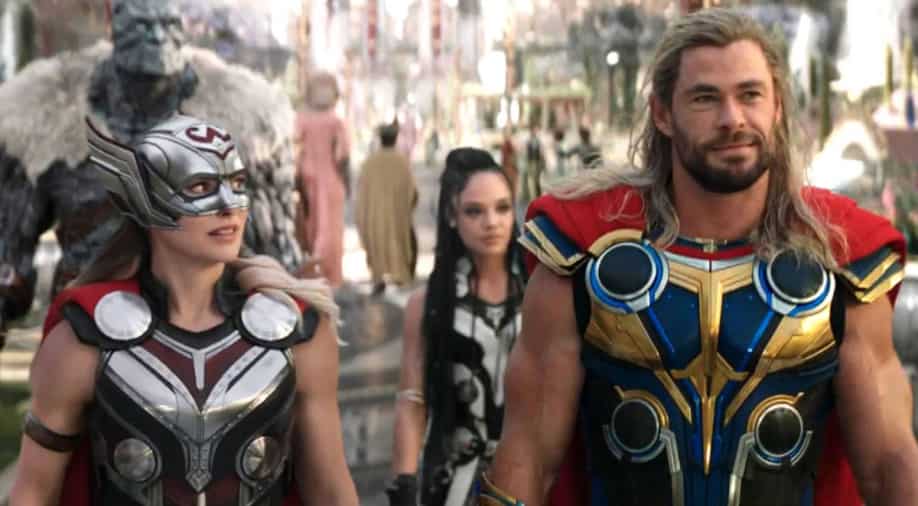 A new clip from Taika Waititi’s upcoming Marvel Cinematic Universe movie Thor Love and Thunder is out. The clip was released during an episode of Jimmy Kimmel Live! that hosted Tessa Thompson (Valkyrie in the movie).

The clip features Thor (Chris Hemsworth), Jane Foster or Mighty Thor (Natalie Portman), and Korg (Waititi). They are discussing the threat of the movie’s supervillain, Gorr the God Butcher (Christian Bale), who moves through the shadow realm, a world in which there is no colour, tells Thor. In response, Jane, wielding the Mjolnir flies off to the sky, saying she will “bring the rainbow”.

As Thor wonders whether that is a catchphrase, Valkyrie says she has only been a Thor for a while.

The scene nicely does two things fans are excited to see most in the movie. First, sets up a titanic final battle between Thor, Mighty Thor and their allies and Gorr. The action in Thor: Ragnarok was one of its highlights and fans expect Waititi to once again dazzle them.

Second, the scene promises that like Ragnarok, Love and Thunder is not going to skimp on the humour. There is going to be a loads of it.

Love and Thunder continues Thor’s story after he left with the Guardians of the Galaxy in in Benetar. He will find a fearsome enemy in Gorr, a being who kills gods as they abandoned him and he vowed to kill every single god in the universe.