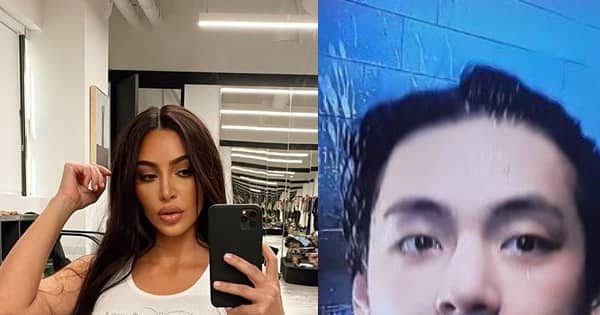 It’s time to take a quick recap of all the top Hollywood news. BTS member V who is enjoying with Wooga Squad left all his fans in utter amusement as a shirt picture of his from the swimming session went viral. Hollywood stars Priyanka Chopra and Lilly Singh has a blast over their night out as they enjoyed a Diljit Dosanjh concert in LA. Keeping Up With The Kardashians star Kim Kardashian has turned ainto newsmaker today as she reportedly accepted undergoing laser treatment. Here’s all the dope of Hollywood News. Also Read – Ek Villain Returns box office collection day 1: Before the John Abraham starrer faces acid opening test, check out the other smash hits of the muscular hunk

Kim Taehyung’s shirtless picture goes viral
BTS member V is enjoying his stay with Wooga Squad which consists of Park Seojoon, Peakboy, Choi Woo Shik, and Park Hyungshik. A shirt picture of his from his swimming session went viral on social media and fans (ARMY) simply could not keep calm. ARMY started swooning over his handsomeness. Also Read – Sachin Tendulkar’s daughter Sara gets brutally trolled as she is spotted in the city; netizens get nasty with comments

Kim Kardashian on her laser surgery
After declining that she has had botox surgery, Kim Kardashian revealed that she has undergone laser treatment to treat her wrinkles, sun tan and more. In the video shared on her account, she wrote, “As we get a little bit older, we get in some sun, our skin develops different pigmentations, so you get all sorts of different skin tones and colors and textures.” She took Dr. Ashkan Ghavami’s treatment at Moxi & Broadband Light & Sciton’s Moxi Laser. Also Read – Sanjay Dutt Birthday Special: From journey to success to tryst with drugs — Interesting facts about Sanju Baba

Gwyneth Paltrow talks about nepotism in Hollywood
In an interview with aceshowbiz magazine, Gywneth Paltrow stated that she works twice as hard as she belongs to a family of stars. Her father is a director and mother an actress. Gwyneth stated that she works hard as there are people to pull her down by saying ‘you don’t belong here’. She was quoted saying, “As the child of someone, you get access other people don’t have, so the playing field is not level in that way. However, I really do feel that once your foot is in the door, which you unfairly got in, then you almost have to work twice as hard and be twice as good. Because people are ready to pull you down and say ‘You don’t belong there’ or ‘You are only there because of your dad or your mom or whatever the case maybe be’.”

Alec Baldwin‘s wife pens note about his enemies
In a lengthy note on social media, Alec Badlwin’s wife Hilaria wrote about the darker parts of his profession. She shared that there are enemies who are always looking to destroy him. An excerpy from the post read, “Enemies of these missions seek to destroy you, in order to delegitimize your voice and purpose. This is not a new tactic…it’s as old as history…yet, how easy it is now more than ever to slander people and cherry pick and piece together strands taken out of context, “opinions”, or complete fabrications. And how some people believe it or stay silent out of fear.”

Stay tuned to BollywoodLife for more updates from the world of showbiz.