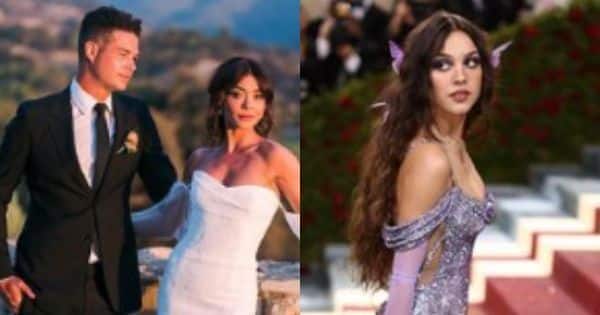 Modern Family star Sarah Hyland got married to Wells Adams in Santa Barbara. The other news is that Scott Disick and Kimberly Stewart were seen together on a date in Los Angeles. Olivia Rodrigo and her beau Zach Bia have reportedly split up. Here is a lowdown… Also Read – BTS: V aka Kim Taehyung’s video from Memories of 2021 is going VIRAL; ARMY’s link it to Jungkook – here’s why

Olivia Rodrigo breaks up with Zach Bia
Grammy award winning singer Olivia Rodrigo has reportedly ended her relationship with Zach Bia. The reason is apparently the fact that they drifted apart. It seems they were not spending time together and the thing fizzled out. They never confirmed that they were dating. It seems they met in February and started hanging out together. But work schedules and different friend groups meant that they could not give each other as much time. The singer has not said a word about her break up. Olivia Rodrigo went viral after her clip with BTS Kim Taehyung at the Grammys 2022. Also Read – BTS’ Suga aka Min Yoongi drops thirst trap selfies; ARMY goes berserk over his hotness [View Tweets]

BTS SUGA sets thirst trap
BTS member Min Yoongi aka SUGA decided to attack ARMY by sharing a couple of selfies early in the morning. We could see his beautiful long hair in all its glory. Fans went crazy seeing how handsome and hot SUGA looked in the pics. His last venture That That with PSY has crossed 30o million on YT. Also Read – BTS: Kim Taehyung’s adorable moments with kids and dogs from Memories of 2021 DVD will make you go aww [Watch Videos]

Scott Disick dating Kimberly Stewart
As we know, Scott Disick and Kourtney Kardashian were together for a long time. Now, she has married Travis Barker, the musician. Scott Disick was seen holding hands with Kimberley Stewart in Los Angeles. They had dinner with a friend. She is the daughter of Rod Stewart. It seems she looked sleek in a skirt and top teamed with leather stilettoes.

Andrew Garfield reveals he was celibate for role in Silence
Andrew Garfield in a podcast has revealed that he starved himself of food and sex for his role in the 2016 movie, Silence. It was directed by Martin Scorsese. He said that he had some trippy experiences as part of that method acting process. He found a spiritual guru in Father Martin.