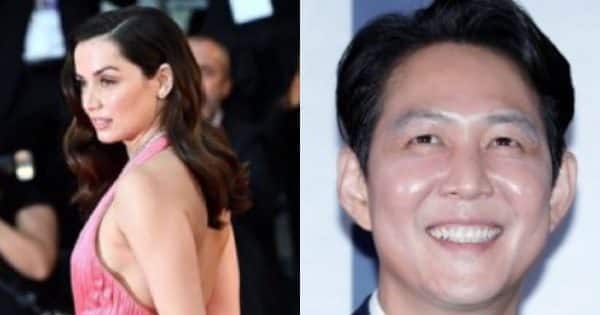 The big news of the day is that Squid Game star Lee Jung-jae has bagged a project in Hollywood’s Star Wars series. It will be aired on Disney. BTS member Kim Taehyung created a frenzy by posting a backless picture on social media. Here is a lowdown of the Hollywood entertainment news.. Also Read – Squid Game star Lee Yoo Mi creates history; becomes the first Korean actress to win big at Creative Arts Emmy Awards

Squid Game’s Lee Jung-jae to lead Star Wars series The Acolyte
Fans of Squid Game star Lee Jung-jae will soon get to see him in an Hollywood project. He has landed a project on the Star Wars series, The Acolyte. It will be streamed on Disney Plus. The news has been revealed by Deadline. He has been signed by Creative Artists Agency in 2022. Lee Jung-jae was also in Cannes for his movie, Hunt which will get a global release by end of 2022. The sci-fi show is a mystery thriller. He will also get busy with Squid Games season two. Also Read – BTS’ Kim Taehyung shares a selfie with Squid Game’s star Lee Jung-jae; ARMY anticipate V in Squid Game 2

Ana De Armas left in tears after Blonde screening
Blonde which is a movie on the life of Marilyn Monroe was screened at the Venice International Film Festival. It got a standing ovation of 14 minutes. The leading lady Ana De Armas was left crying as she was too overwhelmed. She had worn a pink Louis Vuitton gown for the event. Also Read – Emmys 2022 Nominations: Succession leads, Squid Game creates history; check the complete list

Britney Spears wants to repair relationship with son Jayden
The singer who got freedom from conservatorship recently is troubled after her son Jayden’s interview went viral. He has said that her risque pictures did not make things easy for him. It seems Britney Spears has said that she wants to mend things but wants to live with complete freedom.

Kylie Jenner and Kris Jenner were guests on the James Corden where the host asked her if she played a role in releasing the sex tape of Kim Kardashian with Ray J in 2017. She affirmatively said no.

BTS: Kim Taehyung creates riot with shirtless pic
BTS V aka Kim Taehyung has created a meltdown amongst ARMYs with his latest shirtless pic from New York. It is unclear if it is part of the Vogue shoot. This is the first time he has showed his bare back in this fashion. The jewellery for the shoot is from Cartier.

These were the celeb news from Hollywood that created a rage today.